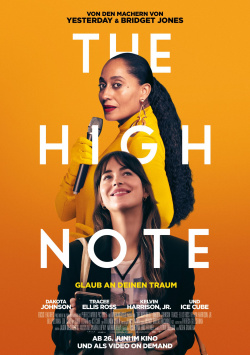 Maggie (Dakota Johnson) has a job that many would envy - at least until they had to do it themselves. That's because working as a personal assistant for music superstar Grace Davis (Tracee Ellis Ross) is truly no walk in the park. Instead of realizing her dream of producing her own music, Maggie has to run errands for the diva and get plowed by her manager (Ice Cube). But when Maggie meets charismatic singer David (Kelvin Harrison Jr.), she sees her opportunity. She convinces him to hire her as his producer. She hides the fact that she actually works for Grace Davis from him, just as she hides the fact that she works on Davis' music from her cranky boss. But it's not long before that lie is exposed and Maggie's dream could be shattered for good.

With The High Note, director Nisha Gantra treads a very similar path as she did with her last film, Late Night. Once again, the focus is on a lowly employee of a less than affable personality who is in the limelight. And again it is about the fact that the famous personality - there a late night talker, here a soul diva - should be more or less sidelined (here in the form of a permanent engagement in Las Vegas), but could experience a second career spring through the influence of this same employee. It's very nice to watch, but unfortunately not quite as amusing as Late Night. Instead of really snappy dialogue, there are some too plodding conversations here that too often drift towards irrelevance.

The film is saved by the likable actors and actresses, as well as the music, which is really good for long stretches. Dakota Johnson doesn't prove to be quite the great actress here, but she makes up for that shortcoming with plenty of charm. Tracee Ellis Ross (Black-ish), herself the daughter of the legendary soul diva Diana Ross, plays her up against the wall in almost every scene. Kelvin Harrison Jr. (Waves) is convincing as a mysterious up-and-coming singer, and Bill Pullman's brief appearance as Maggie's father is also really worth watching.

However, that doesn't hide the fact that, dramaturgically, the film is really very simple-minded. There are no real surprises - aside from a mini-twist - and the characters are overall very one-dimensionally drawn. No question, the film is beautifully filmed and has, also due to the soundtrack, some rousing moments. But nothing and nobody can leave a lasting impression here - neither the leading actresses, nor the songs or even the story. A nice pastime - no more, but also no less and therefore in the end also: worth seeing!

The High Note runs from 25.06. in the cinema and is simultaneously available as VoD (eg.B. at Prime Video and Apple).