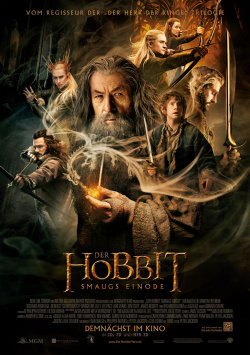 The Hobbit: The Desolation of Smaug

The worst is behind us, I would say. Far from it, dear Mr. Baggins. For many new adventures and dangers await the hobbit Bilbo (Martin Freeman) and the twelve dwarves with whom he set out on an unexpected journey to Erebor a year ago, making what they experienced on the first part of their journey feel like a leisurely stroll against them in Smaug's Wasteland. For not only is the white orc Azog still hot on their heels. On their way to the Lonely Mountain, they also encounter the skin-changer Beorn (Mikael Persbrandt), who isn't exactly sympathetic to dwarves, have to fight giant spiders in the Bleak Forest, and then get captured by the Wood Elves under King Thranduil (Lee Pace) to boot. Although they manage to escape, the danger is far from over. For between them and Erebor lies Sea City. And behind them in the mountain waits the greatest of all dangers: the dragon Smaug, which must be defeated if Thorin Oakenshield (Richard Armitage) and his companions want to reclaim their homeland. And here Bilbo will have a crucial role to play.

Often the first part of the film adaptation of J.R.R. Tolkien's The Little Hobbit was criticized that especially the introduction would drag a lot and that the division of the relatively short book into three films would not have done the narrative pace good. But as Gandalf says to Bilbo: "Good stories are worth a little embellishment. And that's exactly what Peter Jackson did very convincingly in the first film. Admittedly, I'm one of those viewers who already didn't find the many endings of The Return of the King too long and who simply enjoy spending time in the Middle Earth so wonderfully created by Peter Jackson and his team. Plus, I trust that Peter Jackson knows what he's doing and that the somewhat worn beginning will pay off in the end. And that's exactly what can already be seen in The Hobbit: Smaug's Desolation. By Jackson taking his time to build up the story and its characters, as a Middle-earth fan you were able to emotionally connect with Thorin and the other characters and understand why they have to embark on this perilous journey. Granted, there may not be as much at stake as sixty years later in the adventures of Frodo and his companions. But as a viewer you will be carried away by the detailed exposition of this adventure with a very similar intensity - especially since the dark shadow that will soon be cast over Middle-earth is already becoming more and more noticeable.

And so it is no wonder that Smaug's Desolation is much darker than its predecessor. If the latter had relied very often on humor, which one has clearly noticed the child-oriented book template, the more adult Lord of the Rings-feeling asserts itself much stronger in the second part. And not only that. Peter Jackson raises the bar in terms of quality, especially dramaturgically. The film has again been expanded by several elements that do not exist in the book or were only hinted at. And even if some purists will be bothered by the added twists in the fight of the dwarves against Smaug or the completely new character of the elf fighter Tauriel (Evangeline Lilly), you can not accuse Peter Jackson with the best will in the world, that he would have spoiled the spirit of the original, only to extend the story for pure greed of profit on three films. With great attention to detail, Jackson and his co-writers have struck a fine balance between adaptation true to the original work and their own ideas, resulting in a very well-rounded and extremely entertaining whole in the end.

From the opening sequence, which features an amusing reference to a cameo appearance from The Fellowship, the first goosebumps are likely to form on some fans. And in the following 160 minutes, this effect will occur again and again. Not only the numerous references to the Lord of the Rings trilogy are responsible for this. Also many of the sometimes exciting, sometimes humorous and then again very moving moments, accompanied by the once again ingenious music by Howard Shore, which has to offer this section of the adventure, bring especially fans either to grin joyfully, to feverishly or simply to marvel. The latter is primarily achieved by the great special effects, which are once again quite a bit better than in the first film. And luckily this is especially true for Smaug, who the makers really nailed to the spot.

It's hard to remain truly objective about this film as a self-confessed fan. Probably someone who hasn't been looking forward to this movie all year, who hasn't seen all movies multiple times in theatrical release and extended edition or who attends fan events on the internet will find points of criticism that might even be justified in some way - even though I can't think of a moment right now that could serve as an example for that. But even if Smaug's Oneness is not free of small flaws from an objective point of view, from a fan's point of view it is very close to being truly perfect. It's superior to its predecessor in almost every aspect, it offers action, humor, and emotion (without being cheesy), and it offers images that still amaze you in an age of effects-overloaded blockbusters. Plus, the film is full of endearing details that reveal how much the creators love not only their ever-growing bank balances, but really the world they've created based on Tolkien's template.

One quick word about the character drawing. An Unexpected Journey was not infrequently criticized for some of the dwarves being little more than extras. This picture is somewhat more balanced in the sequel. True, there are again some characters who are more prominent than others. Besides Bilbo and Torin, these are mainly Kili (Aiden Turner), Gandalf, Legolas, Tauriel and Bard (Luke Evans). But even if the other characters play rather supporting roles, in this film you have much more the feeling of a community, in which everyone has his (important) role to play. And when someone from this community has to be left behind, this has a certain emotional effect on the viewer, even if this character has rarely been the center of attention so far. Again, it pays off that An Unexpected Journey took the time to introduce the dwarven community in such detail at the first meeting in Bilbo's dwelling.

And so, in the end, all that really remains to be said is that The Hobbit: The Desolation of Smaug is a feast for all fans who already liked An Unexpected Journey. And even those who loved the Lord of the Rings movies but found the first Hobbit too childish or boring will find much less to fault in this sequel. Another good example of how sequels can sometimes be vastly superior to their predecessor. Smaug's Desolation is great entertainment cinema, ending with a truly nasty cliffhanger that makes the wait for the third and final installment a real ordeal. So, get rid of the cynicism and just enjoy close to three hours of perfect reality escape. Absolutely worth seeing!

Cinema trailer for the movie "The Hobbit: The Desolation of Smaug (USA 2013)"
Loading the player ...