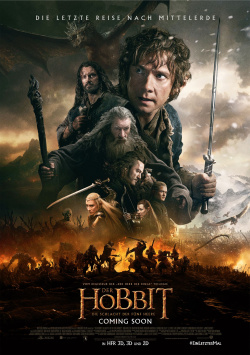 The Hobbit - The Battle of the Five Armies

The impossible has been achieved: the Fellowship of Dwarves led by Thorin Oakenshield (Richard Armitage) has reclaimed the treasures of Erebor and the dragon Smaug has been defeated. But at what cost? Many people in the sea city of Esgaroth have fallen victim to Smaug's fiery vengeance. While the survivors head towards Erebor to find shelter and to demand due compensation from Thorin for their many losses, word of the Dwarves' victory spreads through Middle-earth. And so it is not long before the army of Elven King Thranduil (Lee Pace) makes its way to Erebor. And they are not the only ones ready to go to battle against the king under the mountain. For an almost forgotten evil has returned to Middle-earth: the dark ruler Sauron is sending his legions of orcs to the Lonely Mountain to bring darkness across the land. The situation is coming to a dangerous head, and now it is in Thorin's hands to prevent a war. But surrounded by the treasure of his ancestors, Oakenshield has lost all reason. And so the fate of Middle-earth lies in the hands of a little hobbit. And so Bilbo (Martin Freeman) makes a decision that could yet prevent a battle of the Five Armies.

To be blunt: Who could already do little with the first two parts of the Hobbit trilogy, who always likes to get upset about the fact that Peter Jackson has not meticulously adhered to Tolkien's template and even had the impudence to invent their own characters and plot lines to it and who can generally such fantasy adventures only cynicism and no enthusiasm more, will also not be able to inspire The Hobbit - The Battle of the Five Armies. But for those who love Jackson's Middle Earth and already liked the first two installments despite their flaws, this film will be a near-perfect conclusion to the exciting journey of Bilbo Baggins and the Fellowship of Dwarves, as well as a successful bridge to the Lord of the Rings films.

Note a quick warning: as hard as I will try, this film review will not be entirely free of spoilers. Those who don't know the book and how the story ends should skip straight to the last paragraph. Everyone else can safely read on. Unlike the first two parts, there is no prologue in the finale. The plot directly follows the cliffhanger of Smaug's Wasteland. The ten minutes that follow are truly epic, and Dragon Smaug gets to make another brief appearance for a real goosebump moment. It's the perfect introduction to a film that has exciting, fun, but also extremely emotional moments to offer.

However, Thorin is probably the most interesting character in the film. His transformation from noble leader to narrow-minded warlord who no longer seems to respond to reason is conveyed quite brilliantly by Richard Armitage. But also Martin Freeman as the voice of reason shows once again that he is the perfect casting for Bilbo Baggins. There is only a few scenes in which the actors have much room to develop their acting skills. Because in the shortest of the three Hobbit films, the titular battle and thus action and effects are clearly the focus. Admittedly, there are again some typical Peter-Jackson-moments, which are a bit over the top. Nevertheless, he understands it quite excellently to interrupt the battle action also again and again by calmer moments, which make clear how much he cares about the characters and their story.

A good example of this is the love story between dwarf Kili (Aidan Turner) and Elbe Tauriel (Evangeline Lilly), which is completely unjustly scolded by many. This plotline is executed with enough restraint to never degenerate into dripping kitsch (where cynics allergic to any form of romance are guaranteed to disagree with me), but still emotional enough to make for a scene at the end that can really break your heart. This much I will say: if you liked the two of them in Smaug's Wasteland, you should definitely take tissues to the movies. Similarly well drawn is the friendship between Bilbo and Thorin, built on respect, which is put to a very tough test as the film progresses.

The tone and look of the film is getting closer and closer to the Lord of the Rings films. It still all looks much more artificial, to be sure, which is due to the enormous use of computer effects. But overall, The Battle of the Five Armies comes very close to the greatness that made Peter Jackson's first three Middle Earth films so special. True, some characters come up far too short (something that will hopefully be rectified in the Extended Edition) and some elements of the story could have been fleshed out a bit better. But all in all, Peter Jackson has managed a perfect conclusion to a wonderful trilogy, apart from minor blemishes, and its final minutes build a perfect bridge to The Lord of the Rings - The Fellowship.

Rapid pace that does not allow a second of boredom, a few loosening moments, a lot of action with first-class special effects and two very big emotional highlights make The Hobbit - The Battle of the Five Armies excellent fantasy cinema, with which Peter Jackson more than worthily says goodbye to Middle Earth. When Billy Pippin Boyd sings the perfectly fitting The Last Goodbye during the end credits, many Hobbit fans will have enormous goosebumps, some melancholy and maybe even a little moist eyes. But the joy prevails that the (for the time being?) last trip to Middle Earth was so much fun and in the end turned out as emotional as you wanted it to be as a fan. And for that there is a very clear: Absolutely worth seeing!!!

Cinema trailer for the movie "The Hobbit - The Battle of the Five Armies (USA 2014)"
Loading the player ...