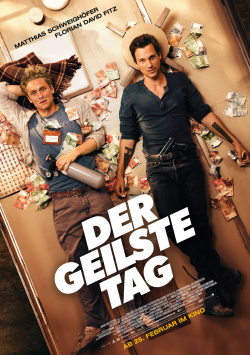 The most awesome day

Although Benno (Florian David Fitz) loses consciousness with nice regularity, he hasn't really worried about it so far. Rather, he's done what he does best: block out any problems and just go about his day. But after he falls onto the tracks in a subway station, he is taken to a special clinic and thoroughly examined. The result is shocking: Benno has a brain tumor and has only a short time to live. He is to spend the last precious moments of his life in a hospice. Not with Benno! The life artist joins forces with the pianist Andi (Matthias Schweighöfer), who has a lung disease, to experience something very special once again - nothing less than the hottest day! Since they don't have to fear any consequences, the unequal duo first scams themselves out of a whole chunk of money in order to set off on one last adventure. But the trip to Africa has a lot of surprises in store for them.

Four years after his directorial debut with the comedy Jesus Loves Me, Florian David Fitz tries again with Der geilste Tag to convince as a leading actor as well as a director and screenwriter. And this time he definitely succeeds better than in his first attempt. That one was quite original, charming and amusing, but it also had some obvious weaknesses. The Horniest Day isn't completely free of those either. Nevertheless, the tragicomedy seems much more mature and coherent than its predecessor. Over long stretches Florian David Fitz manages the difficult balancing act between humor and drama very well, which is also due to the fact that the two main characters are charmingly drawn in their own way.

However, there are a few scenes in which the humor is a bit too brute and flat. This may well lead to hearty laughter from some viewers, but the overall impression, which is in itself very positive, is somewhat diminished by this. Because the movie really didn't need these moments to be funny and entertaining. Said scenes shouldn't be revealed at this point, in order not to spoil the certain element of surprise for viewers who can laugh about them. But it can be said that in their own way they almost seem like a foreign body in the otherwise with a pleasantly sensitive hand executed production.

But fortunately, this point of criticism is clear, but does not weigh so heavily as to make the film even remotely bad. There are simply too many positives for that, from the really good acting of the two leads to some very beautiful imagery and some very funny and also poignant moments. Although the story really doesn't reinvent the wheel and also serves quite a few clichés, as a viewer you accompany the two terminally ill people on their search for the hottest day with great pleasure. A film with wit and heart - even if The Hottest Day isn't the hottest film, it's a damn good one! A loud YES to life - and for this there is then also quite clearly one: Absolutely worth seeing!

Cinema trailer for the movie "The most awesome day (Deutschland 2015)"
Loading the player ...