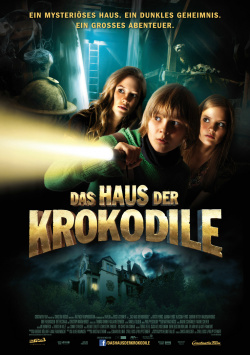 The House of Crocodiles

In 1976, the film adaptation of Helmut Ballot's novel The House of Crocodiles as a multi-part TV series gave many children goose bumps. Even today, the six-parter is considered by many to be one of the most exciting TV experiences of their childhood. 36 years later, directors Cyrill Boss and Philipp Stennert (Neues vom Wixxer, Jerry Cotton) have once again taken on the material and have not only made a worthwhile homage to the TV series, but also a thrilling scary film for children.

Eleven-year-old Viktor Laroche (Kristo Ferkic) has just moved into his uncle's (Dieter Schaad) apartment in an old mansion with his parents and his two older sisters Cora (Joanna Ferkic) and Louise (Vijessna Ferkic), and the parents already have to leave their children alone for a few days. Viktor uses the time to explore the old house and especially the forbidden room, where all kinds of old objects of his uncle are still stored. But as he roams the room completely fascinated by the African artifacts, masks, and stuffed animals, he suddenly sees a strange man standing behind him in the mirror. But since the apartment door is firmly locked, no one wants to believe the boy that there was actually a burglar in the apartment. But Viktor is sure that he has not just imagined the man. As he continues to rummage around in the apartment, he finds the diary of Cäcilie, his uncle's daughter, who mysteriously died in the house many years ago. Viktor is now determined to solve the mystery of Cäcilie at any cost and is convinced that the grumpy Mrs. Debisch (Gudrun Ritter), her son Friedrich (Christoph Maria Herbst) and the crocodiles he found in Cäcilie's diary, in his grandfather's room and in the stairwell are keys to solving the mystery...

The new version of The House of Crocodiles could have gone down the drain had the directors convulsively tried to modernize the story and make Viktor an uber-cool kid who solves the case with the help of iPhones and google. But instead, the makers fortunately relied on the timelessness of the original and focused on making the story as exciting as possible. That this has succeeded is due to several factors. First, of course, is the house, which takes a central role in the film and can almost be called a main character. The filmmakers found the right location in Bad Homburg and with the help of equipment and set design the house was transformed into the perfect setting for this exciting children's film. Thanks to the right lighting and the clever camera angles, the house always creates real goosebumps, especially for younger viewers.

However, of course, the best location would be ineffective if the actors didn't act adequately in it. And here the directors have again shown a good hand. By hiring young actors who are siblings not only in the film but also in real life, the chemistry between the three is perfect right from the start. It is also very nice that Viktor as well as his two sisters are drawn like normal children and teenagers, respectively, and thus offer a good identification surface for the young viewers, too. The adults are also well cast: especially Gudrun Ritter is really scary as the prickly Mrs. Debisch. Christoph Maria Herbst is once again responsible for some rather comedic moments, but overall takes enough of a back seat that he doesn't degenerate into a caricature either.

It's also nice that Thomas Ohrner, who played Viktor in the TV multi-part series, gets to make a small guest appearance here. Anyway, Cyrill Boss and Philipp Stennert manage very well to do justice to the novel as well as to the TV adaptation and at the same time to create something completely their own, which has an absolute right to exist next to the two other versions of the story. Whether the whole thing might not be too slow (you could call it old-fashioned) for today's generation is an open question. The fact is that children's viewing habits have admittedly changed in recent decades. Whether a rather classic scary story can still inspire them is actually doubtful. But maybe it's just the reflection on classic means of suspense, which does without flashy effects, an effortfully cool soundtrack and precocious children and rather addresses primal fears (man in the mirror, creaking floors, a turning doorknob) that will also inspire a new generation of The House of Crocodiles fans.

I wish it were the creators. Because they have really taken a lot of trouble to stage a really good scary movie for kids, which does not scare little viewers from 6 years too much, but can captivate them with suspense for 90 minutes. And since this succeeds very well thanks to the original and all the successful aspects of this remake, the effort should be rewarded! Therefore: Not only, but especially for young viewers between 6 and 14 years absolutely worth seeing!

Cinema trailer for the movie "The House of Crocodiles (Deutschland 2012)"
Loading the player ...