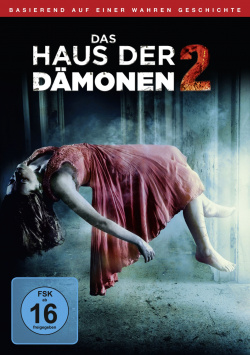 The House of Demons 2 - DVD

Film: Ever since she was a child, Lisa Wyrick (Abigail Spencer) has been haunted by visions of ghosts. When she moves to a remote country home in Georgia with her husband Andy (Chad Michael Murray) and daughter Heidi (Emily Alyn Lind), she is horrified to discover that apparently Heidi is also plagued by such dark apparitions. While Lisa tries to suppress her visions with pills, her sister Joyce (Katee Sackhoff) tries to convince the little girl that her gift is something very special that she doesn't need to be afraid of. And indeed, the ghost of old Mr. Gordy, the former owner of the property, who keeps appearing to Heidi, seems to be a kind-hearted soul. But appearances are deceptive and soon the property's horrific past catches up with the Wyrick family...

The House of Demons 2 is, by title only, a sequel to Peter Cornwell's 2009 box office hit, with debut director Tom Elkins still involved in the editing. Thematically, of course, the two films are related, but the characters and location of the action are quite different in this sequel. However, the German title makes a lot more sense than the original American title. Because in the original part 1 was called A Haunting in Connecticut. But now that Part 2 is no longer set in Connecticut, but in Georgia, A Haunting in Connecticut2: Ghosts of Georgia somehow sounds a little silly.

This is fortunately not an indicator of the quality of the film. Sure, the wheel isn't reinvented here and it also becomes obvious time and again that Elkins is still quite inexperienced as a director. For aside from some really successful goosebumps where the film relies more on the impact of classic creepy effects, the potential for chills is diminished in other scenes by the overuse of music or by showing too much. Those who know a bit about the genre will always spot parallels to other works like Poltergeist II or Amityville Horror. But at times, these similarities are used effectively enough to be considered very good shock value rather than pure knock-offs.

The actors are perfectly fine when measured against what the script asks of them. True, series stars Chad Michael Murray (One Tree Hill, Gilmore Girls) and Kattee Sackhoff (Battlestar Galactica) aren't going to win any awards with their performances. But for a still relatively small classic haunted house production like this, just what Abigail Spencer delivers here can definitely be called successful.

The House of Demons 2 is certainly not the all-time great shocker, nor is it a groundbreaking genre masterpiece. But the atmospheric setting of the story, the well-done creepy moments and some not uninteresting plot elements make this home cinema premiere an entertaining and worth seeing film for everyone for whom horror doesn't always have to be extremely bloody. Worth seeing!

Picture + Sound: The atmospheric filming location in Baton Rouge in the state of Louisiana comes across very well on the DVD thanks to a very atmospheric color mix and the high overall sharpness. The representation of smaller details can convince especially in the brighter moments. But even in the numerous dark sequences, there are only minimal point deductions here. The sound presents itself in an atmospheric Dolby Digital 5.1 mix, which in addition to the well understandably mixed dialogue and the film music also has a few decent surround moments with a slight goosebump effect to offer. Good!

Extras: As a bonus, the DVD has a nearly 10-minute making of to offer, in which the real Wyrick family has their say and comparisons between what (allegedly) really happened and how this was implemented in the film are shown. There's also the trailer, a couple of outtakes (about 4 mins), and 17 minutes of cut scenes, which can be viewed with an optional audio commentary from the director. There's also an audio commentary on the main film itself, with director Tom Elkins assisted by screenwriter David Loggeshall and producer Brad Kessell. Especially the commentary, in which Loggeshall talks about his research and the meetings with the Wyrick family, is very interesting. The only pity is that all extras are offered without any subtitle option and can therefore only be recommended to viewers with a good knowledge of English.

Conclusion: The House of Demons 2 is a sometimes quite decent ghost horror thriller, which lives primarily on its atmosphere and a few successful scare moments. Sophisticated dialogues, a surprising dramaturgy or great acting should not be expected, however. For a home cinema premiere, however, this scary tale is good enough to satisfy fans of the genre. The DVD is technically appealing, the bonus material is decent, but does not have optional subtitles. Overall, however, this is still enough for a: recommendable!