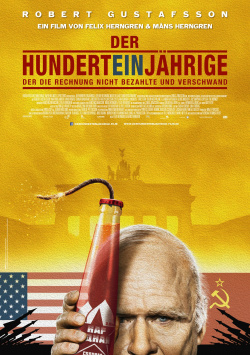 The Hundred-Year-Old Who Didn't Pay the Bill and Disappeared

With his first novel, The Hundred-Year-Old Who Climbed Out of a Window and Disappeared, Jonas Jonasson scored a real surprise hit, and not just in his native Sweden. In 35 countries, the most original history lesson since Forrest Gump stormed the bestseller lists. In Germany alone, the book sold over 2 million copies and spent an impressive 32 weeks at the top of the Spiegel bestseller list. So after millions of readers had already watched Allan Karlsson climb out of a window and disappear, the quirky centenarian also appeared on the big screen in 2013 to continue his winning ways.

And that calculation paid off in full: With his adaptation of the bestseller, Swedish filmmaker and comedian Felix Herngren was able to meet the extremely high expectations of the audience so much that the comedy became the most successful film of all time in Sweden. In Robert Gustafsson, who was convincingly transformed into a centenarian thanks to the good work of the make-up artists, Herngren found a truly wonderful leading man who perfectly transports the very idiosyncratic character of Allan Karlsson from the book to the screen. The film adaptation was also a huge success in Germany. No wonder, then, that the call for a sequel quickly became loud.

While a second novel about Allan Karlsson has (so far) failed to materialize, fans can now look forward to a reunion with the now hundred-year-old title character. With the support of Jonas Jonasson, a new story has been worked out, which Felix Herngren has filmed together with M&aring;ns Herngren. The Hundred-Year-Old Who Didn't Pay the Bill and Disappeared is set a year after the events of the first installment. Allan (Robert Gustafsson), now 101 years old, Benny (David Wiberg) and Julius (Iwar Wiklander) have been having a good time in Bali. A little too well, because there is hardly anything left of the money they stole a year ago. And so the friends leave their luxury hotel without paying the bill, and shortly thereafter end up in a new turbulent adventure that is directly related to the time when Allan, as an occasional spy, was partly responsible for almost escalating the cold war between the USA and Russia because of a soft drink. And even today, there are those who would literally walk over dead bodies for the recipe of the special people's soda.

The Hundred-Year-Old Who Didn't Pay the Bill and Disappeared fishes in very similar waters to its predecessor. Again, Allan is on a madcap journey with his friends, pursued by all sorts of bad guys. And again we get a glimpse into his past, where he more or less ignorantly influenced major events in world history. What this sequel does really well is that, despite a certain structural closeness, it otherwise manages to break away from the popular book template. Of course, there is a certain level of audience expectation here as well. However, this expectation isn't as high as it was with the first movie, because this time there isn't such a popular book to measure up to. And so this sequel seems a little bit more playful, looser, but also a little bit sillier than its predecessor.

And so the rare case of a sequel succeeding here, which is at least in some places even more entertaining than the first part. Sure, a few overly flat gags and a few plodding moments tarnish the fun a bit now and then. But overall, this crazy road trip of 101-year-old Allan can be warmly recommended to all fans of the spry retiree. Absolutely worth seeing

Cinema trailer for the movie "The Hundred-Year-Old Who Didn't Pay the Bill and Disappeared (Schweden 2016)"
Loading the player ...