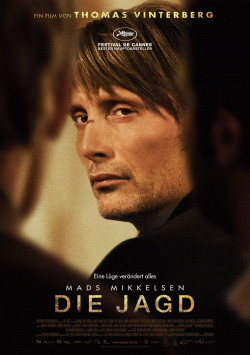 After many setbacks, Lucas (Mads Mikkelsen) finally seems to have found some happiness in his life. After losing his job as a teacher due to his school being closed down, and also having his marriage fall apart, the 40-year-old is really blossoming in his new job as a kindergarten teacher. In addition, feelings seem to develop between him and the temp Nadja (Alexandra Rapaport), which could lead to a serious relationship. Good reasons, therefore, to look positively into the future. But then Lucas is accused of sexually molesting little Klara (Annika Wedderkopp), the daughter of his best friend Theo (Thomas Bo Larsen), of all people. It's a lie that spreads through the small town with frightening speed. Before Lucas can defend himself in any way, he is condemned by his colleagues, his neighbors, his friends. Every piece of evidence, no matter how clear, that points to his innocence is ignored, and the community falls into a state of collective hysteria, heading inexorably toward disaster.

With The Hunt, Thomas Vinterberg (The Feast) has directed an incredibly oppressive drama that grabs viewers after a few minutes, loosening its tight grip toward the end only to strike again with lasting effect. Vinterberg does a first-rate job of making the desperation and helplessness, as well as the rage Lucas feels, downright palpable. At the same time, he never trivializes the topic of child abuse. The film makes clear how important it is to investigate such suspicions. At the same time, however, it also makes clear in a shattering way what consequences misunderstood care can have and how much mistakes in, for example, questioning children can destroy the life of an innocent person.

It is especially the fact that Lucas never for a moment even has the opportunity to defend himself that makes so angry. Because in itself, the child's lie could have been exposed quite quickly. And the fact that the adults no longer believe the girl when she herself says that Lucas didn't do anything, and that they literally convince the frightened child that Lucas, who is so popular with the children, is a sex offender, intensifies the feeling of total helplessness many times over. People's hatred for Lucas would be understandable if he had been clearly proven guilty. But as it is, a small lie reveals people's darkest sides, which can then never be closed off - even if peace can be restored on the surface.

In addition to Vinterberg's superb direction, it is the strong acting of Mads Mikkelsen, always reliable for such a performance, that makes this film such an intense experience. More than believable, Mikkelsen embodies a man who tries with all his might to restore his reputation and save face, and who simply won't give up believing in the good in people and in a victory for justice, no matter how much the rest of his townspeople convince him otherwise. Mikkelsen's play refrains from exaggerated outbursts of emotion, instead thriving on a restraint that makes the viewer fear that it will explode in an extremely drastic way at some point. Precisely because of the supposed calmness, which is also reflected in the pace of the production, the tension is heightened to such an extent that even after the end of the film it is difficult to completely free oneself from it for a long time.

The Hunt is truly not light entertainment, but an extremely difficult film to endure. But it is precisely this intense impact that already makes the drama one of the most impressive and certainly one of the best films of the still-young 2013 cinema year. If you like demanding and challenging dramas and would like to feel the emotional power of cinema again, you should not miss this great work. Absolutely worth seeing!

Cinema trailer for the movie "The Hunt (Dänemark/Schweden 2012)"
Loading the player ...