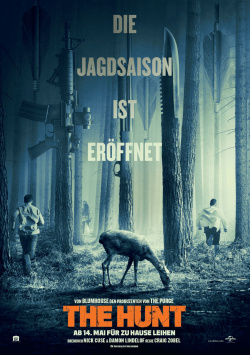 A true horror, twelve strangers are abandoned to: With no memories of how they got there, they grow up in a clearing in the woods. It soon becomes clear that they were brought here for one purpose only: To hunt! Not as hunters, though, but as the hunted of an elite group who indulge in a particularly perverse form of recreation. Quickly, the motley crew is reduced to a bloody mess until Crystal (Betty Gilpin), one of the hunted, turns the tables on the well-heeled recreational killers.

The Hunt was supposed to hit theaters a few months ago, but the horror thriller's release was postponed at short notice after a bloody rampage in the US. The Corona pandemic has now gotten in the way of the second attempt, so this Blumhouse production is now to be released as a home theater rental video. Director Craig Zobel serves up a gory mix of thriller, horror, comedy and satire, which comes across as enjoyably entertaining at many moments. Especially when the group of the hunted, partly consisting of well-known series faces (Emma Roberts from American Horror Story, Justin Hartley from This is Us), is reduced very drastically, it takes on almost grotesque features, which at one moment even gives off a touch of Monty Python (I'm just saying: This is just a flesh wound). If you like it macabre, you'll get your money's worth here.

It's also interesting that typical role clichÃ©s are put through the wringer here. If you think you know exactly what the motivation of the hunters is, you might be in for a real surprise here. Otherwise, there is little that surprises dramaturgically. However, that's not a big deal, because the entertainment value remains almost consistently very high throughout 90 minutes - at least if you have a soft spot for gory thriller-comedies like Ready or Not most recently. In addition, the film can benefit from the fact that some of the actors have slipped into more absurd characters with obvious pleasure - including, for example, Oscar winner Hilary Swank or Betty Gilpin, known from the Netflix series GLOW.

The Hunt could have been a bit more biting on the satirical level. But at least it does then touch on some points that are well worth pondering and even add some depth to the film. But all in all, the entertainment value is of course in the foreground. And here goes: If you like it bloody and a little absurd, if you don't expect real suspense but just some entertaining fun, you should definitely rent this flick or - if possible - watch it at a drive-in. Worth seeing!