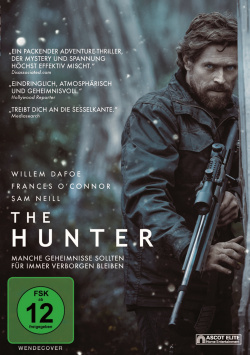 Film: Whoever wants very special tasks done smoothly and without causing a fuss, hires Martin David (Willem Dafoe), one of the best industrial mercenaries around. Martin doesn't ask many questions, doing his job with the utmost precision. When a large biotech company sends him to Tasmania to procure genetic material of the supposedly last Tasmanian tiger, everything initially looks like another lucrative job for Martin. But as soon as he arrives at his lodgings with Lucy Armstrong (Frances O'Connor), the wife of a missing eco-activist, and her two children, Sass (Morgana Davies) and Bike (Finn Woodstock), the first difficulties begin to surface. Forestry workers angered by activist blockades, the helpful but shady Jack (Sam Niell) and, last but not least, the harsh and dangerous wilderness of Tasmania make the search for the precious animal extremely difficult and highly dangerous. As Martin slowly befriends Lucy and finds out more about her husband's disappearance, the otherwise professional hunter threatens to lose sight of his real mission - and in doing so, he puts more than just his life at risk.

The Hunter is a quiet drama, buoyed by its engaging imagery, that gradually transforms into a riveting thriller. Based on the novel The Hunter by Julia Leigh, who recently tried her hand at directing herself with the controversial drama Sleeping Beauty, filmmaker David Nettheim has directed an atmospheric flick that expertly blends environmental, ethical and psychological themes, adds elements of mystery and survival thrillers, and then seasons the whole thing with a moving family drama. However, with a completely unexciting production that revels in wonderful shots of the mysteriously enchanting Tasmanian landscape, the film clearly eludes the viewing habits of the general public after just a few minutes.

Because Nettheim provides very little dialogue and builds the tension extremely slowly. This works very well, especially in the scenes that show Martin hunting, setting traps, or reading tracks. In other moments, such as his interaction with Lucy's daughter, who is a bit too forward, the whole thing feels a bit forced. But the strong acting of lead actor Willem Dafoe carries the film even in its less successful moments.

If you can get into the slow narrative style Nettheim has chosen, the finale will hit you with full force. Not only does the film reach a very good climax of tension here, but dramaturgically and especially emotionally, the viewer gets an effective punch right in the pit of the stomach here. Even if the whole thing is then resolved for some perhaps a little too sweet, so the end is consistent in itself and above all very coherent.

The Hunter may not be the adrenaline thriller that the DVD cover promises. The film is just too quiet for that, and ends up being much more drama and psycho-study than hard-hitting survival thriller. But that doesn't mean that the story, which has an oppressive and threatening undertone from the beginning, isn't exciting. But the film doesn't get its tension from action, but from its silence, from its psychological density and from its great pictures. If you're looking for the big thrill, you'll probably be disappointed. But if you are looking for a well-acted, dramaturgically dense and visually gripping character drama, you will be well served here. Worth seeing!

Picture + Sound: The film lives on its fascinating landscape shots, which thanks to the good detail sharpness and atmospheric coloring, which determine the image of the DVD, can also develop a very special effect in the home theater. The colour tones are very natural, with browns and subtle greens being particularly noticeable. The sound is largely very restrained, as the action is dominated by many quiet moments. The unagitated score and some good ambient sounds, along with the dialogue, are the main components of the less than spectacular but very coherent soundscape. Good.

Extras: In addition to the trailer for the film, the DVD has a multi-part making of (approx. 30 min.) to offer, which goes into detail in individually selectable chapters on various aspects such as the book template, the characters or the shooting in Tasmania. Good.

Conclusion: The Hunter is more quiet drama than sweaty thriller. But director David Nettheim manages to keep the viewer riveted until the harrowing conclusion by slowly but steadily building tension and an underlying menace that accompanies the entire film. If you like sophisticated cinema, this mixture of drama, survival thriller and eco-crime can be recommended, especially since the DVD both technically, as well as in the bonus material knows how to please. Recommendable