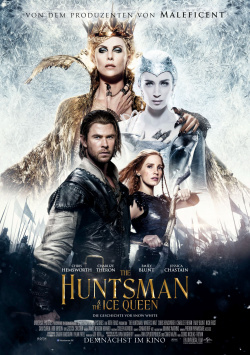 The Huntsman & The Ice Queen

Many years before Snow White was able to defeat the evil Queen Ravenna (Charlize Theron) and gain dominion over the kingdom, Ravenna still ruled here along with her good sister Freya (Emily Blunt). When the magic mirror reveals to the evil queen that Freya's child would one day be more beautiful and powerful than her, she uses a ruse to ensure that the child is killed. The enormous grief of the loss freezes Freya's heart and unleashes enormous powers within her, which she uses to create her own icy kingdom in the north. Here she raises children into an army of perfectly trained Huntsmen who, over the years, fight many bloody wars to grow her kingdom ever larger. Her best fighters are Eric (Chris Hemsworth) and Sara (Jessica Chastain), who are devoted to their queen. There's just one rule they just can't follow: despite the absolute ban on love in Freya's kingdom, the two develop feelings for each other. When the Ice Queen finds out, her revenge is merciless. But this is only the beginning of the story.

The Huntsman & the Ice Queen tells the prequel to the hit movie Snow White & The Huntsman in the first few minutes, before the prequel turns into a sequel. But if you're hoping for a Snow White reunion now, you're in for a disappointment. Because after the negative headlines, for which director Rupert Sanders and Snow White actress Kristen Stewart had caused by their affair on the set, both are no longer on board for this sequel. Cedric Nicolas-Troyan, who was responsible for the special effects in the predecessor, has now taken a seat in the director's chair. Of the cast, Charlize Theron and Chris Hemsworth are joined only by Sam Clafin in a mini-appearance and Nick Frost as the dwarf Nion.

Stylistically, Nicolas-Troyan rides the exact same line as Sanders. But even though some of the effects look pretty good, the whole thing feels a bit like a B-movie version of a film that doesn't necessarily belong in the A-league of fantasy cinema either. The idea to mix known fairy tale elements to a sometimes quite dark fantasy spectacle sounds quite promising on paper. But to be able to realize it in a way that it works, you need a really good filmmaker. And where Sanders already revealed clear weaknesses, Nicolas-Troyan reveals even more obvious incompetence. From the good templates that the story, the set or the effects offer him, he can't exploit the necessary potential. And when there are clear weaknesses in the script, he fails to cover them up with a dash of irony or breathtaking showmanship.

In addition, there are simply no scenes that make the action feel really big. Instead, there are a lot of moments where nothing really happens, while the aspects of the story (big battles, etc.) that could have provided plenty of spectacle are either only briefly covered or even just mentioned by the narrator. The story is supposed to be more epic and the threat to the kingdom even greater than it was in the first installment. And yet, overall, the film feels smaller, more unspectacular and also cheaper than its predecessor. Moreover, the attempts to tell the story around Snow White without leaving her completely unmentioned seem arguably cramped.

The chemistry between Chris Hemsworth and Jessica Chastain is very coherent, and Emily Blunt plays the Ice Queen suitably undercooled. And there are definitely some scenes that come up with decent entertainment value. But unfortunately, that's not enough to make this tale an all-around successful fantasy adventure. If you really liked Snow White & The Huntsman (and not necessarily because of Kristen Stewart), you will also find enough positive aspects in The Huntsman & the Ice Queen to justify a visit to the cinema. But if you expect more than pretty people and some good effects, you will be disappointed all the way. And that's why it's only good enough for one: With cutbacks just worth seeing!