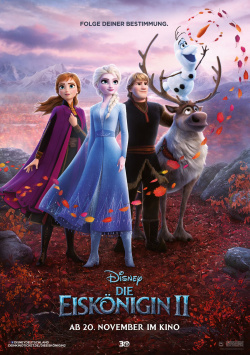 After a somewhat bumpy start, Elsa has now gotten used to being the Queen of Arendelle. Her sister Anna and boyfriend Kristoff are still fiercely courting each other, snowman Olaf and reindeer Sven now best friends. Yes, one can confidently say that life in Arendelle could not be more beautiful. But time and again, a mysterious song resounds from afar, which only Elsa seems to hear. She feels that she must answer this mysterious call. For she is sure that she will then finally learn more about her powers and her destiny. It is clear that Anna, Kristoff, Sven and Olaf will not let her go alone. The journey takes them to the magical cloud forest, where an adventure awaits Elsa and Anna that goes far beyond their imagination and is very closely connected to the sisters' past.

There is probably no children's film that has left such a lasting impression on girls in particular in recent years as Disney's The Ice Queen. The free adaptation of Hans Christian Andersen's fairy tale grossed more than $1.2 billion at the worldwide box office and washed a veritable flood of merchandise into children's rooms around the world. At Mardi Gras, you've seen little Elsas everywhere for years, and there are probably few parents who can sing along to the lyrics of Let it Go in at least one language. Although a few years have passed, the popularity of the film seems unbroken. So it's fair to assume that Ice Queen 2 will be another mega-blockbuster - and may even replace the first part as the most successful animated film of all time.

After the huge success, it was feared that the makers would play it safe and simply present a rehash of the first part. But that fear has thankfully not been confirmed. The Ice Queen 2 tells a whole new story that builds very well on the events of Part 1. Therefore, you should definitely have seen this one before going to the cinema. In the end, the film perfectly concludes the story about Elsa and her magical powers, but leaves enough room for possible further parts - even if they are reportedly not planned so far.

The sequel again offers a few very catchy songs and a lot of humor, but is also overall a bit darker and especially in the last act much sadder, than its predecessor. Even if - this should be said for the reassurance of all children - everything will be fine in the end, of course, there are at least two scenes in which even adults will shed many a tear. The story itself is a little more complex than that of the first film. And since very young viewers might be a bit frightened by this thrilling adventure film at some points, it's advisable - despite the 0+ release - to see it in theaters only for ages 6 and up.

The Ice Queen 2 may be a princess fairy tale, but it's also a great adventure film. There are stone giants, a magical enchanted forest, a horse made of water and ice, and a very touching resolution to the mystery of the mysterious voice. Songs like "Where No One Has Ever Been," "Show Yourself," and the very beautiful "It Comes to You," which their mother used to sing to Elsa and Anna when the sisters were little, are instantly catchy. And for adult viewers who grew up in the 80s, Kristoff's power ballad "Abandoned in the Woods" is a real highlight that will put a big grin on their faces. It brings back memories of hits like Glory of Love by Peter Cetera - reindeer chorus included!

Not to forget Hape Kerkeling, who is almost single-handedly responsible for the film being almost better in the German version than it was in the original English - and that's a rarity indeed. But his Olaf is simply much better than Josh Gad, who lends his voice to the snowman in the original. So all in all, The Ice Queen 2 is a more than successful sequel that brings the story of Elsa's magical powers to a very nice conclusion. Absolutely worth watching not only for girls, but for all children aged 7 and up, as well as adult fans of great animated adventures!