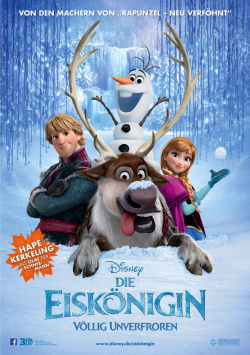 The two royal daughters Elsa and Anna are inseparable and spend almost every minute together in the picturesque kingdom of Arendelle. Anna thinks it's just great that her sister has the gift of turning everything she touches to ice, as she can make it snow even in the middle of the night in the palace, turning the nursery into a giant ice rink. But suddenly Elsa withdraws completely, is completely cut off from the outside world by her parents. Anna can't understand this and over the years keeps trying to get her sister to leave the room. When the royal couple is killed in a tragic accident, Elsa must indeed leave her refuge, as she must now succeed to the throne. But while Anna is bubbling over with joy at being reunited with Elsa, Elsa is only afraid that she won't be able to control her powers at the coronation ceremony. And so it comes as it must: when Anna announces to her sister that she is to marry the charming Prince Hans, whom she has just met, and Elsa refuses to give her consent, an argument ensues, during which Elsa turns everything in the castle into ice and snow. Humiliated by this loss of control, she retreats to the mountains, unaware that behind her, the entire kingdom will fall into an eternal winter. In order to save Arendelle and bring Elsa back, Anna sets out on a dangerous journey through the eternal frost, receiving unexpected help from the nature boy Kristoff, his reindeer Sven and the lovable snowman Olaf.

For many, a Disney film has become as much a mandatory part of the pre-Christmas season as mulled wine and cookies. With The Ice Queen - Completely Unforgiven Chris Buck and Jennifer Lee then also deliver a very classic Disney fairy tale, at least dramaturgically, which can immediately enchant the viewer on a purely visual level and put him in the right Christmas mood. The 3D animated fairy tale is technically quite great cinema, which packs its adventurous story in perfectly implemented images down to the smallest detail. Getting lost in this world is really fun in 2D as well as in the really good 3D.

So far, so good. But compared to the last Disney fairy tale Rapunzel - Newly Revenged, to which The Ice Queen - Completely Unforgiven is clearly based in several respects, the story of Anna and Elsa takes much longer to really get going. Especially in the first half hour there is almost nothing but singing, which is just a bit too exhausting in the long run and slows the story down again and again. In addition, the songs are not necessarily the best that has been composed for a Disney movie so far. Sure, some of the melodies are nice and catchy, but at some point you wish there would be a normal dialogue without someone singing one of his songs again. In the second half the musical character decreases clearly and if then also still snowman Olaf appears, the entertainment value of the until then only quite nice film clearly in the height.

Olaf is one of these Disney Nebenfiguren, which one closes already after few seconds in the heart and which steal the actual main characters completely the show. This is further intensified in the German language version by the excellent decision to have the snowman dubbed by Hape Kerkeling. Kerkeling gives the character a character all his own, which undoubtedly gets the best laughs in the film. Besides Olaf, reindeer Sven also provides some very amusing moments. The two of them are simply no match for their human counterparts. And they are then also, the one the long and sometimes too schmalzigen singing interludes benevolently accepts.

The Ice Queen - Completely unfrightened is - especially for real Disney fans - a very nice film. But in the studio's overall oeuvre, this very free adaptation of Hans Christian Andersen's fairy tale - which, after all, already served as the inspiration for Arielle the Mermaid - is one of the more mediocre entries. But for an entertaining and atmospheric visit to the cinema, which has child-friendly adventure suspense, humor and heart to offer, this is the perfect fodder.

A quick word about the obligatory pre-film, which has turned out very original. Here, you initially feel like you're watching a very old, classic Mickey Mouse cartoon. But suddenly the line between traditional cartoon and modern 3D animation is broken and out comes a really funny fun, in which Mickey fans will have their bright joy. Therefore, only with small restrictions, a clear: worth seeing!