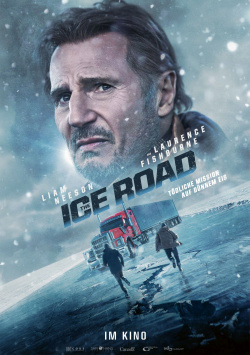 After an accident in a remote diamond mine, quite a few miners are trapped. Time is running out for a possible rescue. To do so, a team led by veteran Ice Road trucker Mike McCann (Liam Neeson) must truck tons of drilling equipment across the slowly melting Ice Roads of the frozen lakes in Canada's far north. But nature isn't the only enemy along the way, as someone in their own ranks tries to stop the rescue mission. And as the miners slowly but surely run out of oxygen, Mike and the rest of the team must soon fight for their own survival....

I have a confession to make right now: I like the aging action Liam Neeson. Sure, most of the movies he's delivered in recent years all follow a very similar pattern. They may not be masterpieces in terms of quality and are dramaturgically unoriginal, but they have usually always been able to entertain me well. If it says Action-Liam on it, you know exactly what you're going to get. And that seemed to be the case with "The Ice Road": Liam Neeson as an Ice Road Trucker with special talents - that can only be good.

And indeed the first minutes are promising. Although already here some clichés and a complete predictability of the plot make themselves felt, but the atmosphere and the tension are right. But the joy is quickly clouded. Because what director Jonathan Hensleigh then put on the floor ... sorry ... on ice, is B-Movie Trash of the unfortunately not very entertaining kind. Clichéd characters, dialogue to run away from (which is then also slurred) and sometimes extremely cheap-looking CGI effects nip any emerging pleasure in the bud.

The film has - despite an absolutely uninspired story - a lot of potential to be an entertaining action fun. But Hensleigh skillfully knows how to avoid that. With action scenes far from any logic, a completely overdrawn villain and - I can't say it often enough - extremely bad dialogue, the filmmaker manages to make his movie leave even hardcore genre fans absolutely cold. Too bad, because Liam Neeson and melting Ice Road - that could have been so damn entertaining. It is now unfortunately not and therefore there is here also only one: very conditionally worth seeing!