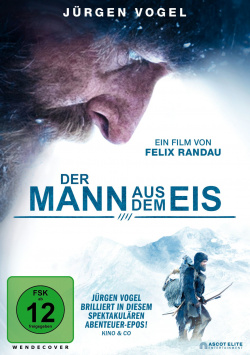 Film: About 5,000 years ago Kelab (Jürgen Vogel) lived with his family with a tribe in the Ötztal Alps. It's a simple but peaceful life. But this is suddenly destroyed when the settlement is attacked and the whole tribe is brutally killed. Only Kelab, who was hunting at the time, survived and is now seeking revenge. He wants to find and kill the murderers of his family, who also stole the sanctuary of the tribe. But the rough nature makes the search difficult and when he has finally found a trace, he has to ask himself whether blind revenge is really the right way…

"The Iceman" is a really ambitious film project. Filmmaker Felix Randau wanted to make the fictitious re-drawing of the possible last days of "Ötzi", probably the most famous mummy in Europe, as authentic as possible. The shooting at original locations should guarantee this as well as the equipment and the dramaturgy reduced to the essentials. The most courageous decision of the director, however, was to let his characters communicate in a form of Rhaetian language and not to translate it - for example through subtitles. Even though it's not difficult to follow the already silent plot even though you don't understand the spoken language, this is a challenge for the audience that you have to get involved with.

Whoever succeeds is rewarded with a visually intense survival thriller that lives from a stark contrast between the harsh beauty of nature and the brutality of history. The problem with movies like this is that they often seem somehow "played". This is certainly due to the fact that - even if the motifs may have a connection to the present - the Stone Age epoch in which the story takes place simply seems strange. But in contrast to "The Cold Heart," for example, where the effort for authenticity led to the whole thing appearing like a staging in an open-air museum, this form of staging works quite well in "The Iceman.

As I said, you have to be able to get involved. Those who succeed in doing so will be offered an atmospherically dense mixture of revenge and survival thriller, which throws a possible glance at the last days of man, who 5,000 years later wrote history as "Ötzi". Worth seeing!

Picture + sound: The picture on the DVD captures the beautiful rough atmosphere of the wilderness very well with a good sharpness of detail and a harmonious color scheme. In the dark scenes there are some small blurs to be noticed, but in the bright shots there is hardly any reason to complain. The sound is mixed rather cautiously, but especially in the ambient noises of the mountains, an atmospheric surround feeling is pleasantly noticeable. Good.

Extras: Besides interviews with the actors Jürgen Vogel, André M. Hennicke and Susanne Wuest, as well as the director Felix Randau and the producer  , the DVD also has a short promo-making of, as well as a short alternative end to offer. Finally, the bonus material gives the viewer a glimpse of the battle rehearsals and the best feature of the film's set. Good.

Fazit: "The Iceman" is an ambitious adventure film that scores with its atmospheric visual language and an exciting story. The courage to do without a translation of the Rhaetian language or subtitling pays off. Because in this way the film can fully play out its authentic power. That's certainly not everyone's cup of tea. But if you can get involved, you will get 90 minutes of thrilling entertainment, which is available on the DVD in good picture and sound quality. As a bonus there are interviews and an interesting look at the set of the film. Recommended!