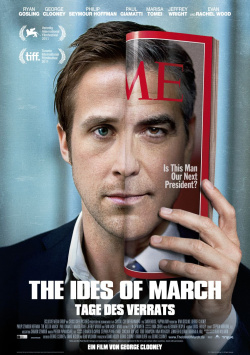 The Ides of March - Days of Betrayal

Political thrillers are certainly not among the films that bring the studios the big money. Although there are always excellent representatives of this genre, which can then also always clear at the numerous film awards, but at the box office, these films often prove to be downright box office poison. Even big names like George Clooney can do little to change that. Nevertheless, the superstar dares to tackle exactly this difficult subject with his latest directorial effort and delivers a great drama with The Ides of March - Days of Betrayal, which you should definitely give a chance.

Based on the play Farragut North by Beau Willimon, the film centers on young political consultant Stephen Meyers (Ryan Gossling), who at just thirty years old has already made it to the top and gets to organize the campaign of promising presidential candidate Mike Morris (George Clooney). Whether dealing with the press or the opposing camp, Stephen always finds the right tone to make his candidate look good. Filled with self-confidence and a good dose of idealism, Stephen's career seems to know no bounds. But an affair with young intern Molly (Evan Rachel Wood), of all things, sends the usually level-headed Stephen off the rails. And so he allows himself to be lured into a perfidious trap by the opposing advisors, which will force him to have to choose between his career and his so precious ideals.

The Ides of March - Days of Betrayal is not only quite great acting cinema, in which in addition to Clooney especially Ryan Gossling, Paul Giamatti and Philip Seymour Hoffman deliver extremely good performances. Gossling in particular has displayed extreme versatility in recent months, cementing his reputation as one of the best representatives of young Hollywood. And here, too, the mime wows with a blend of charm and intensity that allows him to easily hold his own against the likes of Clooney and Giamatti.

But the film is also an intelligent and, at the same time, extremely entertaining thriller that very ably captures the political climate, and not just in the United States. Of course, the film is about politics, fast dialogues are the rule and the complex contexts definitely require the whole attention of the audience. And yet the whole thing doesn't come across too unwieldy and never loses sight of its entertainment mission. George Clooney succeeds masterfully in telling a thrilling story and stimulating the intellect of his audience at the same time. Sure, The Ides of March - Days of Betrayal is a very American film, but the question of how far you are willing to go for your career is truly not limited to the US and makes the thriller very interesting for German viewers as well. Especially since the look at the dirty tricks in the US election campaign should certainly not be completely unknown to politicians in Germany.

George Clooney absolutely lives up to his reputation as a director and actor with this film. With a great script, in which besides Clooney also his longtime production partner Grant Heslov and playwright Beau Willimon were involved, and a great ensemble of actors, Clooney has packed an inherently not exactly audience-friendly material into an entertaining, but also highly intelligent garb, which makes The Ides of March - Days of Betrayal on balance absolutely recommendable especially for friends of the somewhat more sophisticated US cinema!

Cinema trailer for the movie "The Ides of March - Days of Betrayal (USA 2011)"
Loading the player ...