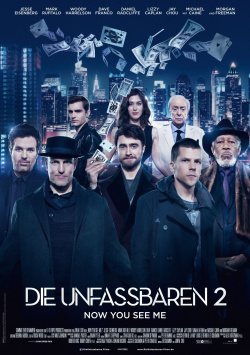 The Four Horsemen are back: a year after outwitting the FBI and the powerful Arthur Tressler (Michael Caine) in the spirit of Robin Hood, the four magicians return to the spotlight. Replacing the departed Henley, the mysterious Lula (Lizzy Caplan) has joined the other Four Horsemen, J. Daniel Atlas (Jesse Eisenberg), Merritt McKinney (Woody Harrelson) and Jack Wilder (Dave Franco). They plan to use a grand illusion to expose a corrupt high-tech tycoon. But the plan goes awry and after it is revealed that the magicians are working with FBI agent Dylan Rhodes (Mark Ruffalo), they must once again go on the run. This one leads them, not entirely by choice, to a completely reclusive entrepreneur named Walter Mabry (Daniel Radcliffe), who offers the team a lucrative proposition: if they retrieve for him a computer chip that was allegedly stolen from him by his former business partner, he'll see to it that they get their freedom and reputation back. It sounds too tempting to refuse - but Mabry is playing with marked cards. Can the great illusionists actually be tricked this time?

In 2013, Louis Leterrier's The Incredibles emerged as a palpable surprise hit. The film, which seemed something like David Copperfield had directed a remake of Ocean`s Eleven, was not entirely convincing, especially in terms of logic, but delivered a really good cast and an extremely high entertainment value, which made the many logic holes absolutely forgivable. The whole thing might not have been a magical cinematic experience - but it was a very fun one. And since the box office was right in the end, there is now a sequel, with Step Up director Jon M. Chu behind the camera this time. And as usual, Chu tries to make the second part even more spectacular, even more racy and even more amusing.

This project is only partly successful. No question about it, The Inconceivables 2 is again very entertaining entertainment with some very great realized sequences. The theft of the computer chip, for instance, is a prime example of the high fun potential of this series. But the attempt to top part 1 results in even less logic and an even more contrived plot, which lacks one thing above all: the great element of surprise of the predecessor and its fresh, unused initial idea. The actors of the first part also show an infectious joy of acting the second time around. With Lizzy Caplan and Daniel Radcliffe, two very coherent newcomers were also hired. Radcliffe in particular, who has tried out in a wide variety of roles since the end of Harry Potter, is convincing across the board as a shady entrepreneurial nerd. You can just tell he's having fun playing against his image, and even if the script doesn't necessarily demand quite great acting from him, his enjoyable acting leaves a thoroughly positive impression.

It's a shame that a lot of potential is squandered here just to mislead the audience as spectacularly as possible. Since the tricks, when revealed, are only exposed as lazy and unfortunately also extremely lame magic, the lack of logic behind it all becomes much more obvious than it was in the first movie. Should there be a third installment, which the finale is definitely working towards, the makers would do well to take it down a notch again. But even if the quality of the predecessor is not reached by far and much of the charm of the first part is missing, the fast-paced staging, the well-performed actors and some quite wonderful scenes make up for many of the weaknesses. And so in the end there is also a no longer quite so magical, but still more than solid: worth seeing!

Cinema trailer for the movie "The Inconceivables 2 (USA 2016)"
Loading the player ...