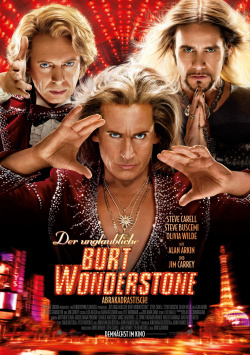 Las Vegas - the city of lights, casinos and big shows. Here, the magician duo of Burt Wonderstone (Steve Carell) and Anton Mervelton (Steve Buscemi) have been wowing audiences with their illusions for years. But over the years, Burt in particular has lost his former enthusiasm for magic. Routine, complacency and meaningless affairs now dominate the popular magician's daily life. But times are changing and soon the duo's illusions no longer seem fascinating, just old-fashioned. Street magicians like Steve Gray (Jim Carrey) are the future of the magician business with their unconventional tricks. Casino owner Doug Munny (James Gandolfini) knows this, too, leaving his former stars only one option: either modernize their shows and thus fill the auditorium again, or they end up on the street. Reluctantly, Burt and Anton grasp at the last straw. But when that attempt fails miserably, the once-good friends fall out and go their separate ways. For Burt, this also means the end of his big Las Vegas show. There is only one direction for his career - and it leads straight to the basement. In order to be able to play at the top again, Burt would have to rediscover his old enthusiasm for magic. But it's seemingly gone forever.

In The Incredible Burt Wonderstone, director Don Scardino takes an amusing and biting look behind the scenes of show business. Of course, similarities to Las Vegas acts like Siegfried and Roy and street magicians like David Blane and Chris Angel are completely unintentional and only hit so perfectly by pure coincidence. While the trailer suggests extremely over-the-top silliness, the film itself is largely devoid of cheap jokes and over-the-top claptrap. Sure, subtle humor isn't exactly pulled out of a hat here. But Scardino always manages to keep it all within a coherent framework. He relies more on nice absurdities, classic slapstick and clever asides on show business, which are still enriched with wonderful wordplay, at least in the original English version.

Why the comedy also works so well is that while it takes the world of magicians for a ride, it only really makes fun of certain aspects. Self-promoters and unscrupulous businessmen are taken for a ride here, but not the people who are dedicated to magic because they love to make people wonder and dream. It's only because of this that a character like Burt Wonderstone, who has actually mutated into an arrogant puke because of his success, can still become a sympathetic figure, which is essential to the film's success.

No less important, of course, are the actors. And here Scardino has hit the mark on several occasions. While Steve Carell provides some quite wonderful laughs especially in the moments when he acts completely self-absorbed, smarmy and misogynistic, Steve Buscemi is convincing as his somewhat naive, yet somehow lovable partner. Olivia Wilde is pleasingly much more than pure eye candy as the ambitious assistant Jane, and Michael Bully Herbig, a popular German actor, also turns up in a very small but funny supporting role. But the secret star of the film is undoubtedly Jim Carrey, who is just great as Burt's rival Steve Gray. By significantly reducing his usual grimacing and playing his character with an almost over-the-top seriousness, his performance comes across as all the funnier. And when Gray's performances culminate in an absolutely absurdly brutal act of self-mutilation, Carrey gets to really hit his stride once again.

The script, penned by Jonathan Goldstein and John Francis Daley, best known as a cast member on the series Bones, is bursting with nice and funny ideas, sometimes very obvious, sometimes a bit more hidden, that Scardino has implemented, giving the actors several excellent opportunities to convince the audience of their comedic talent. The end result is an immensely funny and charming comedy that shows that you can be silly without having to get platitudinous and raunchy, and that you can be biting without having to get vicious and cynical. So if you're looking for light US comedy with a high gag density and can confidently do without the fecal humor that is unfortunately almost obligatory for American comedies at the moment, then you've come to the right place in the world of the incredible Burt Wonderstone. Absolutely worth seeing

Cinema trailer for the movie "The Incredible Burt Wonderstone (USA 2013)"
Loading the player ...