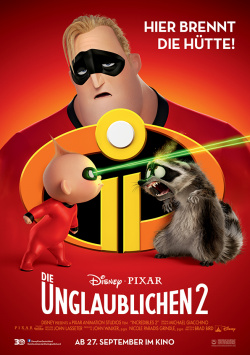 The Incredibles Are Back! After Bob Parr a.k.a. Mr. Incredible, his wife Helen a.k.a. Elastigirl, and their children Violet and Dash wreak havoc on the city while trying to take down a greedy bank robber, the superheroes' fate is seemingly sealed. The Parrs are once again relegated to anonymity. But the heavily wealthy siblings Winston and Evelyn Deavor want to change that with the help of Elastigirl. While Helen shows full commitment to polish up the image of superheroes, Bob has to take care of the children and baby Jack-Jack, which plunges him into a deep crisis of meaning. But then a new villain emerges in the form of Screenslaver, whom Elastigirl must put a stop to at all costs - unaware that she is in danger of falling into a long prepared trap in the process.

When The Incredibles hit cinemas fourteen years ago, there wasn't yet the mass of superhero adventures that Marvel and DC unleash on audiences on what feels like a monthly basis. And even when it came to animated films, class actually still ruled over mass. So it's no wonder that the mix of superhero adventure and James Bond homage was able to leave such a big impression on audiences. Although circumstances have changed significantly in recent years and the competition has grown considerably, the Parrs do incredibly well again in their second cinematic adventure.

The Incredibles 2 picks up directly from the end of the first installment. Aside from the fact that the animation quality has visibly improved, the movie is like a reunion with old friends from the very first second. Director Brad Bird has done a very good job of plausibly continuing the story after all these years and consistently developing the beloved characters. Does it work? Yes and no. The film just lacks that special something that made the first installment stand out. It is noticeable in the production that this time also tried to outdo not only the predecessor, but also the other cinema superheroes. As a result, some scenes are just too much of a good thing. As a result, some of the charm of the first film is also lost.

However, not too much. Bird has managed to direct one of the best superhero films in recent memory, and definitely the best animated film in recent months, despite the weaknesses that have almost inevitably occurred due to the changing landscape of cinema. The adventure is bursting with original ideas, great action and humour, which quite often makes you laugh in tears as an audience member. Especially Baby Jack-Jack, the secret star of the film, provides some real roars.

Although The Incredibles 2 can not surpass the original, the film is a more than successful sequel, which is preparing to become the most successful animated film of all time with a box office total of nearly 1.2 billion dollars. A great pleasure for children over 6 and all adult fans of Mr. Incredible and his family. Absolutely worth seeing