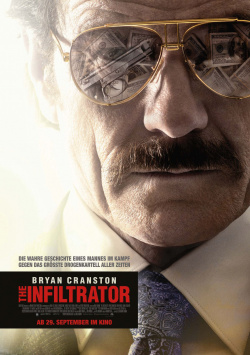 In the 1980s, then U.S. President Ronald Reagan declared the so-called War on Drugs, with the primary goal of dismantling Pablo Escobar's Colombian drug cartel. Undercover investigator Robert Mazur (Bryan Cranston) pursues a very special strategy: he wants to follow the flow of money and thus put a stop to the masterminds. As businessman Bob Musella, whose specialty is laundering money in large quantities, he manages to penetrate to Escobar's right-hand man Roberto Alcaino (Benjamin Bratt) and win his trust. But the further Mazur and his colleague Kathy Ertz (Diane Kruger), who plays his fiancée, are drawn into the vortex of the powerful drug cartel, the greater the danger that their cover will be blown - and that could have deadly consequences for them and their families....

For The Infiltrator, Bryan Heisenberg Cranston switches sides. As undercover agent Robert Mazur, the Breaking Bad star sets out to take down one of the world's biggest drug cartels in the thriller drama based on Mazur's autobiography. Brad Furman's film thus provides the perfect counterpart to the popular Netflix series Narcos (season 1 just came out on DVD). Although you actually know how the story is going to turn out from the beginning, Furman (The Client) does a great job of building up tremendous tension. In every moment you are waiting for Mazur's cover to be blown - especially because this enormously dangerous action is the first undercover mission for his colleague Kathy. Spiced with a smattering of wordplay and a perfect 80s atmosphere, the film manages to draw the viewer into the fight against Escobar's cartel.

However, there are also some lengths and scenes that don't really want to work. Around the middle of the movie the story drags a bit too much. Boredom does not arise, but the tension suffers a little. The good actors, first and foremost a once again great Bryan Cranston, can make up for this to a large extent, but the feeling remains that a slightly tighter production would have done the film good in the end. It wouldn't have taken over two hours to tell these true events.

However, even if The Infiltrator isn't quite the big hit, it still turned out to be a very good film. That's not just because of the actors, but simply because the story is simply gripping - especially considering what Mazur and his team have accomplished with their multi-year effort. Furman also does a very good job of showing the impact the investigator's work has had on his marriage. In one scene, he is forced to mix his personal life with the undercover assignment. The reaction on his wife's face is simply very moving and is undoubtedly one of the emotional highlights of the film.

If you appreciate suspenseful drug dramas and want to see Bryan Cranston in another stellar performance, you should overlook any weak points in the production and definitely check out The Infiltrator. It's worth it

Cinema trailer for the movie "The Infiltrator (USA 2016)"
Loading the player ...