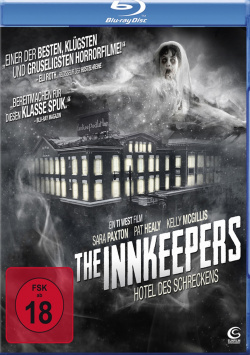 The Innkeepers - Hotel of Horrors - Blu-Ray

Movie: The last one turns out the lights! Claire (Sara Paxton) and Luke (Pat Healey) have taken on the last shift duty before the once-successful Yankee Pedlar Inn hotel is forced to close its doors forever and be demolished. Guests are few and far between in these final days. Only the once famous actress Leane Rease-Jones (Kelly McGillis) still uses Claire's services from time to time. The two spend the rest of their time feeding their interest in the paranormal by rummaging through the past of the hotel, which has become known as a haunted house. After all, they want to find out if there is any truth to the supernatural rumors before the house is finally razed to the ground. But curiosity can be a particularly dangerous thing - and Claire and computer nerd Luke soon have to find that out for themselves.

The Innkeepers starts off very thoughtfully. Director Ti West (The House of the Devil) takes a lot of time to develop his characters and build up a creepy atmosphere. While this might scare off some viewers who expect a film about a hotel of horrors to have plenty of gory shock moments and merciless suspense from the first moment. Such viewers might find the long conversations between Claire and Luke downright boring. But upon closer inspection, it's in the quiet beginning focused on its characters that the film's great strength lies. For it is only by breathing life into the main characters and not degrading them to interchangeable templates, as is unfortunately all too common in the horror genre, that the finale gains enormous intensity.

Also, the slow but steadily increasing use of sound effects works particularly well in this form of staging. What West and his sound designer Graham Reznick have delivered here is pure goosebumps. It's truly worth the wait. Admittedly, there are some dramaturgical lengths and at times the impression arises that the material is not enough to fill 100 minutes of film. But this impression fades away the more the story builds up to its climax. Slowly, but very effectively, West tightens the suspense screw and uses purposeful shock effects, which work so well precisely because they are not overinflated.

Even compared to the utterly failed Cabin Fever 2, which Ti West had previously directed, The Innkeepers is a quantum leap forward in terms of quality. Whereas in the sequel to Eli Roth's cult hit, West relied on striking disgust and completely over-the-top gore humor, here he builds on restraint. And even if he can probably cause little enthusiasm with real slasher fans, so friends of atmospheric scary movies should feel a visit to the scary hotel a pleasant goose bumps and just no boredom. So if you value atmosphere and characters more than bloody shock effects, you should definitely join the Innkeepers for the last shift at the Hotel of Horror. It's worth it!

Picture + Sound: The Blu-ray's clean picture pleases with a very high level of detail and an atmospheric color scheme, which is further supported by the coherent black levels. The audio starts out like a rather unspectacular stereo mix, dominated primarily by the dialogue. But from the second half of the film onwards, the superbly used sound effects come into their own, providing not only movement in the surround channels, but also a fair amount of creepiness. Good.

Extras: In addition to the trailer, the Blu-ray has a short look behind the scenes (about 7 minutes) and two audio commentaries to offer. The first was recorded by director Ti West with his sound designer Graham Reznick and producers Peter Phok and Larry Fessenden, who joins the conversation later. The whole thing is a rather technical commentary on the camera work, the excellent sound design, the writing of the story or the editing. It's a thoroughly interesting and engaging commentary thanks to the easy-going atmosphere that exists between the participants.

The second audio commentary is once again provided by Ti West, who this time is joined by his two leads Sarah Paxton and Pat Healey. With the three of them talking primarily about their work in front of the camera, there is relatively little overlap with the first commentary.

Unfortunately, no German subtitles are available for the bonus material, so the audio commentaries in particular can only be recommended to interested viewers with a good command of English.

Conclusion: The Innkeepers starts very quiet and worn, which does the creepy atmosphere and the successful shock effects in the last third but no harm. Who also in horror films more value on characters and atmosphere, than on bloody shock effects, this scary movie can be warmly recommended to the heart, especially since the Blu-Ray can convince not only content, but also technically. Recommendable