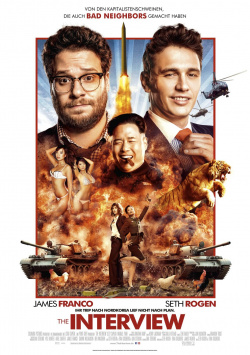 Few films have caused as much of a stir in recent years as the comedy The Interview. The work is said to have been the cause of a widespread hacking attack on the film studio Sony, behind which masterminds from North Korea are suspected. Then, after threats were made against the makers and theaters that wanted to show the film, Sony decided to pull the film entirely. Suddenly, the film became a symbol of artistic freedom and many Americans felt it was their patriotic duty to make sure they saw the comedy. Even President Barack Obama joined in the discussion. When a few smaller theaters agreed to show the film, it did hit American theaters for Christmas as originally planned. The hullabaloo surrounding the hacker attack, the outrage the film caused in North Korea and the terror threats have of course been covered extensively in the German media. And so The Interview is likely to get a lot of attention once again for its theatrical release in Germany. The question now is whether the film really deserves it?

The story centres on the vain TV presenter Dave Skylark (James Franco), who has a lot of fame but hardly any reputation. No wonder his ambitious producer and best friend Aaron Rapoport (Seth Rogen) feels absolutely underwhelmed and longs to finally produce a meaningful show. This might actually come to fruition when Aaron learns that North Korean dictator Kim Jong-Un, of all people, is a big fan of Dave's and would be willing to be interviewed by him. After Aaron and Dave agree to the North Korean regime's terms, nothing stands in the way of the controversial interview. But just before they leave for North Korea, the two friends are sought out by CIA agent Lacey (Lizzy Kaplan), who orders them to kill the dictator. Although they are not at all suitable for it, Dave and Aaron agree to the dangerous mission. But of course, things turn out very differently than planned.

The hubbub of The Interview is best described in the words of the immortal William Shakespeare: Much Ado About Nothing. For Evan Goldberg and Seth Rogen, exploit the satirical potential of their story far too infrequently, focusing instead on inserting as many adolescent penis jokes into the film as possible. Yet the very beginning reveals what the film could have been. A wonderfully self-deprecating guest appearance by rapper Eminem, the over-the-top portrayal of James Franco as a TV snob guided by his oversized ego, or a biting discussion about quality television - or what is commonly thought of as such - give hope for a wicked media satire. Even the scenes in North Korea let here and there this satirical undertone flash through, which the film so desperately needed to be able to work.

If the two directors had concentrated on this, then The Interview could actually have had something like meaning. But they'd rather deal with Aaron having to hide an American probe from the guards for minutes on end, and the only thing suitable for that purpose is his anus. Whenever a hint of intelligence and profundity appears in the story, five cheap fecal gags are shoved right after it. You don't want to intellectually overwhelm your target audience, after all. But for a deeper stoner comedy, the subject matter is just too serious. And since the film recognizes that itself in a few moments, the overall work doesn't work by any stretch of the imagination.

No question, there are some really good laughs in the film. But unfortunately, the flat jokes dominate here, making it hard to stomach even for fans of previous collaborations between the Rogen/Franco duo like This is the End or Pineapple Express. That this of all works has become a political issue and a symbol of artistic freedom is almost a little sad. Therefore, detached from all the hullabaloo, threats and political backstory, The Interview is nothing more than a long penis joke that is only just worth watching for loyal fans of Seth Rogen and James Franco!