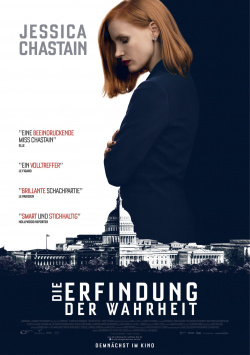 The Invention of Truth

Elizabeth Sloane (Jessica Chastain) is one of the best and most feared lobbyists in Washington. Her iron will and ruthlessness make her a star in the industry. No wonder the powerful gun lobby has chosen her to help stop a new unwelcome gun law. An easy task for Miss Sloane, really. But now, of all times, she switches sides and goes against her law firm and the gun lobby. Wanting to prove to herself that she can win even this seemingly hopeless battle, she becomes a dangerous opponent for her former employers - an opponent who must be silenced and politically destroyed at any cost.

The Invention of Truth takes a look into the world of lobbying, unknown to many. This is primarily driven by political strategies and long dialogues. Sound dry and boring? But exactly the opposite is the case. Director John Madden (Shakespeare in Love, Best Exotic Marigold Hotel) has created an extremely intelligent political drama that captivates until the last second and offers extremely exciting entertainment. This is partly due to the superb screenplay by Jonathan Perera, a lawyer by training, which delights with intelligent dialogue and clever twists and turns. With the complexity of the story and its elaboration, one may actually not believe that Perera has never written a screenplay before. He has managed to convey a difficult subject in a way that is easy to understand, enrich it with some dry humour and incorporate it into a suspenseful story. Respect for that.

But this also goes to lead actress Jessica Chastain, who delivers a real tour de force as the unscrupulous lobbyist. As Elizabeth Sloane tries to show strength in every situation, even when she is personally attacked or physically drained, Chastain plays simply superb. She acts amidst a first-rate ensemble that expertly passes the ball to each other, especially in the perfectly choreographed verbal exchanges. On the acting level alone, the film is a real treat. There the more than two hours really fly by, without even for a second something like boredom could arise.

The Invention of Truth is one of those films, which you wish for as large an audience as possible, but where you also know that it will unfortunately have a damn hard time to be able to achieve this. Because when the audience has the choice between a colorful animated film or a cracking action spectacle and an intelligent, dialogue-only thriller about lobbying in Washington, very few will probably opt for the latter - even if that would be the best choice in terms of quality, offering fodder not only for the eye but also for the brain. So if you're looking for sophisticated entertainment par excellence and don't need any car chases to be pressed into the cinema seat with suspense, this is a film you definitely shouldn't miss. Absolutely worth seeing

Cinema trailer for the movie "The Invention of Truth (USA 2016)"
Loading the player ...