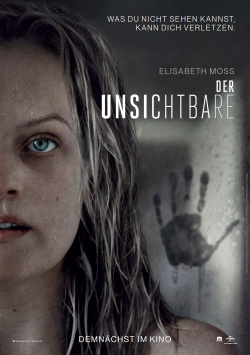 Marriage to violent control freak Adrian (Oliver Jackson-Cohen) is a living hell for Cecilia Kass (Elisabeth Moss), and she wants to finally escape it. With the help of her sister Emily (Harriet Dyer), she manages to escape one night and hide out with her childhood friend James (Aldis Hodge) and his daughter Sydney (Storm Reid). For weeks she lives in panic of being discovered here, until she receives word that her ex, a wealthy as well as brilliant scientist in the field of optics, has taken his own life. Cecilia gets most of his fortune and the freedom she has craved for so long. But as eerie coincidences begin to pile up around her, Cecilia begins to doubt that Adrian is really dead. But when she discovers the unbelievable truth, no one wants to believe her. And so she must take up the fight alone against an enemy hidden from her eyes.

With The Invisible Man, Leigh Whannell (Insidious 3) ventures to reinterpret the classic material based on the novel by H.G. Wells. Actually, the part of the monster universe that Universal Pictures wanted to start with the remake of The Mummy. For the leading role Johnny Depp was announced for a long time. But after The Mummy fell far short of the studio's expectations despite the star power of Tom Cruise, the monster universe was immediately scrapped and all planned projects put on hold. Now, however, the story is going forward with a significantly reduced budget under the guidance of producer Jason Blum, completely independent of any notion of a franchise.

And so the focus is no longer on the titular Invisible Man - as it surely would have been with a Johnny Depp in the lead role - but on his wife, played by Elisabeth Moss. Moss plays strong, but perhaps a little too over the top here and there. You almost get the feeling that she had all the positive reviews of her performance in The Handmaid's Tale in mind and wanted to kick it up a notch. It does fit the character she plays, as she is always balancing on the edge of insanity, not least due to the psycho terror of her transparent husband. Still, it comes across as just a tad too far over the top in places.

In addition, some of the supporting characters are rather distracting. For instance Sydney, the daughter of Cecilia's best friend, who behaves absolutely illogically in one scene towards the end, while in another moment she comes across as extremely unlikeable, though this is not intentional. It may be that only I was bothered by this, but if someone gave me $10,000 a month, a simple thank you would be more important to me than a cool happy dance. I admit, it's really just a small thing that has little negative impact on the overall impression. I'm probably just too old-fashioned that way.

Be that as it may, let's get to the most important question about the film: is it suspenseful, or even scary? The answer here is clearly. Yes! Especially in the first half, Leigh Whannell has included some really rousing elements of suspense that provide real thrills even without a lot of bloodshed. And, what really pleases me as a fan of the genre, he also managed two really good surprises, which I don't want to spoil here. But one of them is already one of my favorite horror movie moments of the last few years.

The Invisible Man proves, with a few minor flaws, that it doesn't take a big budget to direct a horror movie that can convince not only visually and atmospherically, but also (for long stretches) in terms of acting and especially dramaturgy. For this, there is clearly a: Absolutely worth seeing!

Cinema trailer for the movie "The Invisible Man (USA 2020)"
Loading the player ...