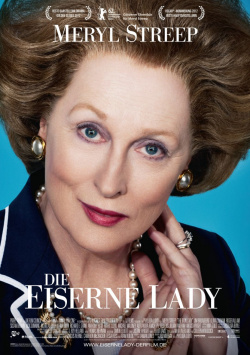 Meryl Streep has already been nominated for an Oscar 17 times. But only three times the great actress could take the golden boy. The third Oscar came in 2012 for Streep's portrayal of Britain's former Prime Minister Margaret Thatcher, also known as The Iron Lady for her sometimes tough and determined demeanor. Mamma Mia! director Phyllida Lloyd traces forty years of Thatcher's life, though her film does end up being quite different from usual biopics.

Because the life story is told from the point of view of Margaret, now in her eighties, who has largely withdrawn from the public eye and has the longest conversations with her late husband Denis (Jim Broadbent). After her daughter Carol (Olivia Coleman), who is deeply concerned about her mother's growing confusion, is able to convince the former top politician to finally sort out Denis's belongings from their shared wardrobe, Margaret is increasingly haunted by memories of when they first met, her first attempts at politics, and eventually her many triumphs, as well as various political setbacks and missteps. These are memories that Thatcher must face in order to avoid having the rest of her life's journey determined by the past...

No question, The Iron Lady is acting cinema at quite a high level. Not only does Meryl Streep, who, thanks to the excellent work of the make-up artists, thrills as a younger but also aging Margaret Thatcher, but the rest of the cast deliver excellent performances. Alexandra Roach as the youthful Margaret or Jim Boradbent as Thatcher's husband Denis make the film a real pleasure purely from an acting perspective. But just as clear as the high quality of the cast is that without Meryl Streep, the film would be a rather inconsequential work.

Because the occasionally strange, overly long sequences dealing with the creeping confusion of Thatcher's mind seem a little forced, whereas the scenes illuminating Thatcher's political career seem rather sterile. In these moments, it almost seems as if Lloyd is ticking off some obligatory points without investing in them the same heart and soul that is evident in the moments with the ageing Thatcher. Not that those scenes are bad. There are always quite wonderful scenes, such as when Thatcher learns to speak in a more determined and respectful manner. But in the end, the whole thing somehow seems strangely inconsequential and, to make matters worse, a little soulless.

When Thatcher talks to her late husband, who keeps appearing to her, it becomes clear what potential Lloyd has given away. Here the film is full of heart and life, and the original approach to looking from this point in Thatcher's life to her political work is also absolutely promising. That being said, The Iron Lady is unfortunately a bit of a disappointment. Those expecting a biographical drama in the style of The Queen will certainly leave the cinema disappointed. However, if you want to watch a stellar acting performance, take a somewhat dry journey through forty years of Margaret Thatcher's life spiced with light British humor, and can overlook some rather dry moments, you can definitely be recommended to see The Iron Lady.

Cinema trailer for the movie "The Iron Lady (Großbritannien 2011)"
Loading the player ...