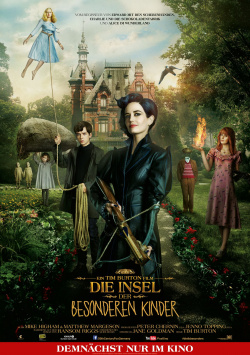 The Island of Special Children

After the death of his beloved grandfather, Jake (Asa Butterfield) begins to doubt his state of mind more and more. Are the fantastic stories his grandfather told him true, or did he imagine what he thinks he saw on the night of his death? In order to finally close the book on this chapter, Jake travels with his father (Chris O`Dowd) to the island where the home for children with special abilities is supposed to be located, run by the mysterious Miss Peregrine (Eva Green). At first, Jake's parents' assumption that he imagined everything according to his grandfather's stories seems to be confirmed, as the home has been in ruins since World War II. But suddenly Jake is part of a magical adventure that reveals a whole new world to him - but one that could be life-threatening for more than just him.

With The Island of Special Children Tim Burton once again delivers a fantasy film enriched with many special effects. It doesn't exactly bring to mind positive memories of his hugely successful but somehow soulless adaptation of Alice in Wonderland. But thankfully, the film adaptation of Ransom Riggs' best-selling book turned out far more imaginative, whimsical and wonderful than the Mad Hatter CGI overkill. Burton, in his own special way, manages to transport the audience to a magical world where there are time loops, flying children and dark creatures. Certainly, young people with special abilities have been seen in cinema many times before, especially in the recent past. But what makes the children overseen by Miss Peregrine so special is truly extraordinary - and that goes for the visual realization of their abilities as well.

It's pleasing that Burton isn't afraid to take the story and make it a bit quirky and unadaptable. It makes his film different from the countless fantasy young adult films that have been seen in recent years. Especially the final battle of the special kids against the henchmen of the mean Barron (wonderfully creepy: Samuel L. Jackson) is so wonderfully bizarre that it's just a joy. But for all the showmanship, Burton also takes the time to tell the very imaginative story and develop at least some of the characters well. This makes it easy for the audience to become immersed in this world along with Jake - and by the end, you actually don't want to leave.

Although children are central to the story, The Island of Special Children is not a children's movie. It's just too creepy for little viewers under 12 - like when Barron steals his victims' eyes. But the fact that things get a little darker here also gives the film a very special touch and makes it accessible to fantasy fans beyond 16. Burton has created a great, cross-generational adventure with an extremely high entertainment factor. The fact that his film stands out a little bit from the masses and is also a little bit special, could lead to the fact that the really big success remains denied to him. But that would be a real shame, because it would be a shame if Burton didn't bring the two follow-up novels about Jake and the special children to the big screen. Because in times of dystopian visions of the future and half-baked fantasy adaptations, the genre absolutely needs a trilogy like this! So get in the cinema and make sure that the people in charge give the green light for part 2 quickly! Absolutely worth seeing!

Cinema trailer for the movie "The Island of Special Children (USA 2016)"
Loading the player ...