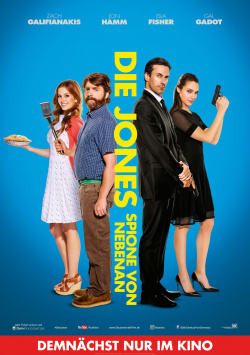 The Jones - Spies Next Door

Excitement is high for Jeff (Zach Galifianakis) and Karen Gaffney (Isla Fisher) when new neighbors Tim (Jon Hamm) and Natalie Jones (Gal Gadot) move in. While Jeff can hardly believe his delight that a cool guy like Tim apparently wants to be friends with him, Karen is convinced that there's something wrong with the two of them. Because the Joneses are just too perfect. And in fact, their new neighbors are not who they claim to be. Tim and Natalie are agents on the hunt for a dangerous arms dealer who wants to hijack technology being developed at the company Jeff works for. And suddenly the Gaffneys are part of a top-secret and exceedingly dangerous mission, with more than just their own lives on the line.

The Jones - Spies Next Door is the latest prank from Greg Mottola, who has demonstrated an obvious talent for comedy, wordplay and timing with films such as Superbad and Paul - An Alien on the Run, as well as his work on acclaimed TV series such as The Newsroom and Arrested Development. Unfortunately, there's little of that in this agent comedy. The film isn't bad and has some very amusing moments to offer. But somehow it just lacks the right spice to leave a lasting impression. For an action comedy there are just too few good laughs and not enough real action. As soon as one of both comes into action, the movie works really well. But unfortunately, there are too many moments where it doesn't and where only tired gags and almost boredom dominate the proceedings.

The actors can make up a tiny bit of ground there. Jon Hamm does a very good job both in the comedic moments and as an action hero. Gal Wonder Woman Gadot primarily uses her feminine charms, but also proves herself to be a really tough fighter, which definitely builds anticipation for her upcoming superheroine adventure. And Isla Fisher scores with a mix of high cuteness factor and charming slapstick. Hangover star Zach Glifianakis, on the other hand, seems to have lost much of his comedic talent along with his pounds. He often acts so on the back burner that even in such moments, which are actually perfectly tailored to him, he can only generate a tired smile from the audience.

As diverting fun for in between, the whole thing might work quite well. But given the talent in front of and behind the camera, the end result is a bit disappointing. And so it goes: If you like easily digestible US comedies with a bit of crude humor and some action, you can watch The Jones - Spies Next Door with confidence. All others can wait for the home cinema release. Only with restrictions still worth seeing!