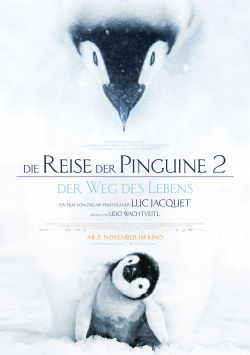 The Journey of the Penguins 2

Twelve years have passed since Luc Jacquet delivered one of the most successful documentaries ever with The Journey of the Penguins, propelling a whole wave of animal and nature documentaries into cinemas. Now the filmmaker has once again set off to Antarctica to pay another visit to the emperor penguins. Equipped with the latest camera technology, Jacquet and his team spent two months observing a group of emperor penguins and accompanying young animals on their first voyage of discovery to the sea. What makes the animals, which stand motionless in one place for months, make their way to the water seemingly abruptly? What drives the young penguins, who have never been taught to swim, to plunge into the sea? What dangers lurk along the way for the flock?

These questions and more are addressed in The Penguins' Journey 2. Using the latest HD technology, which has also made filming underwater possible, Jacquet has again captured some stunning images. It's at times touching, at times amazing, and at other times very amusing. However, the film also has two major weak points. The first is the unnecessarily convoluted narrative structure. Again and again, the documentary jumps back and forth in time. This sometimes makes sense, but often also causes a bit of confusion. The dramaturgy built up in this way also leads to a humanization of the penguins in places, which really shouldn't happen in a nature documentary like this. Admittedly, the whole thing is much more restrained than in the first film, where the penguin parents and their child were allowed to speak with appropriate voice over commentary - which, at least in Germany, was only patched up for the DVD release with an optional soundtrack featuring Sky Du Mont as narrator. Even though this was thankfully dispensed with in the second film, some moments still seem too contrived here and lack the objectivity necessary for a documentary.

The second weakness results from the great success of the first film. It has attracted so many similar works that the second part after twelve years now just does not quite want to succeed in building a similar sense of fascination and wonder, as the Oscar winner of 2005 has managed. Of course, that doesn't make this sequel a bad one by any means, but on a certain level it does make it a rather inconsequential film. Despite great visuals and some very nice moments, The Penguins' Journey 2 just doesn't manage to leave a lasting impression.

Who loved the first film and can not get enough of penguins or who simply has a weakness for great filmed nature documentaries, can confidently go on another journey with the emperor penguins. However, if you expect a similarly moving film as the first part, you will probably be disappointed. Therefore there is the deserved worth seeing only with small reductions.

Cinema trailer for the movie "The Journey of the Penguins 2 (Frankreich 2017)"
Loading the player ...