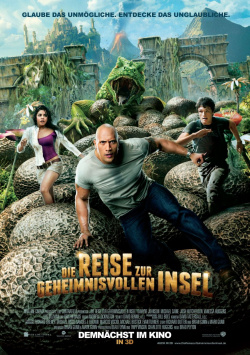 Voyage to the Mysterious Island 3D

James Cameron's Avatar was undoubtedly the film that kicked off the current 3D boom. However, the science fiction epic was not, as one might think, the first full-length feature film in the new 3D technology. That honor can go to the adventure film The Journey to the Center of the Earth, based loosely on motifs by Jules Verne and starring Brendan Fraser. After the technology took a big leap forward in the last four years and the first installment made enough money despite rather weak reviews, now comes The Voyage to the Mysterious Island to our cinemas.

After his first big adventure, Sean Anderson is still fascinated by all the puzzles and mysteries that emanate from the books of Jules Verne. And like many other followers of the author, Sean firmly believes in the existence of the mysterious island where he believes his grandfather Alexander (Michael Caine) to be. After intensive research, which has gotten him in trouble with his mother (Kristin Davis) more than once, Sean seems to have finally figured out the coordinates that could lead him to the island. That his hated father Hank (Dwayne Johnson) of all people helped him with that wouldn't be a big deal. But the fact that the man now demands to go with him on the adventurous journey, Sean's anticipation clouds noticeably. But that changes when he meets Kailani (Vanessa Hudgens), the attractive and quick-witted daughter of the helicopter pilot Gabato (Luis Guzmán), who is supposed to fly them to the island. But even though the sight of her makes his hormones boil over, Sean doesn't lose sight of his real goal: he wants to get to the mysterious island despite all the dangers. But when his wish comes true, he finds that he wasn't really prepared for the adventure that awaits him there.

Journey to the Mysterious Island is admittedly technically far superior to its predecessor. The effects aren't always perfect, but the huge hurricanes or the escape from a giant lizard are quite something to behold and really make a difference, especially in 3D. And when Dwayne the Rock Johnson then hurls a few berries in the direction of the audience by means of his twitching pectoral muscles, the fun factor of the film increases significantly. But also the dramaturgical production is even better compared to the first film. Admittedly, the whole thing is dripping with clichés and pathos and the family-friendly message is beaten on the viewer too penetratingly. But director Brad Peyton (Cats & Dogs 2) always keeps the entertainment value in mind, can entertain with some good gags and decent moments of suspense especially the young target audience quite.

While the humour is often at toddler level, such as when Gabato expresses hope that the giant lizard won't want to eat anything that has AA in its pants, the exchanges between Hank and Alexander and Sean's adoring glances at Kailani are good for a laugh or two. The action and moments of suspense are at a tolerable level for kids, and aren't too over-the-top or too exciting, so little adventure fans aged 6 and up can definitely be recommended to go to the movies.

Journey to the Mysterious Island will not be able to win any awards for its script, character drawing or acting performances. Anyone expecting any form of pretension here will be bitterly disappointed. But as an adventure film for children between the ages of 6 and 12, the 3D movie works quite well. And even if the aha effect is missing, which the weaker first part could still create due to the new 3D technology, The Journey to the Mysterious Island is on balance one of the rare cases where a sequel is clearly better than the original.

Cinema trailer for the movie "Voyage to the Mysterious Island 3D (USA 2011)"
Loading the player ...