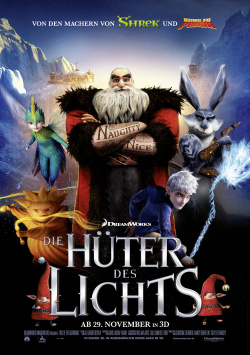 The Keepers of the Light

Darkness threatens the children's rooms of this world. Where usually the Sandman provides for sweet dreams, where the Tooth Fairy, the Easter Bunny and Santa Claus provide for shining children's eyes, there now Pitch, the bogeyman, wants to rule with fear and terror. Of course, the Guardians of Light want to prevent this. But the four veteran heroes of all children are not strong enough alone to take up the fight against Pitch. Jack Frost, of all people, who is not really one of the great benefactors, is assigned to them by the Man in the Moon as the fifth Guardian of the Light. But how are the Easter Bunny, Santa Claus, Sandman and Tooth Fairy supposed to defeat the evil Pitch when they can't even manage to rein in the rebellious Jack Frost? Or does the fire of a true hero lurk beneath the icy surface after all?

The Guardians of Light is based on The Guardians of Childhood book series by William Joyce. The idea of characters like Santa Claus and the Easter Bunny working together to fight evil so that joy and imagination can continue to reign supreme in the children's rooms of this world may not be entirely logical from a religious and cultural perspective alone, but it still has a certain charm, though there is little of that in Peter Ramsey's animated film.

While there are some very endearing characters, such as the Yetis who work for Santa Claus and the somewhat underexposed elves, who of course just happen to be reminiscent of the Minions from I - Simply Incorrigible with their behavior, thus providing really good laughs time and time again. Also the Easter Bunny, who is wonderfully voiced by Hugh Jackman in the original, but in the German version has to make do with the much less convincing voice of Matze Knop, is with his not so cute nature a guarantor for funny and also quite original moments.

The real problem of the film is that it has little to offer except for a few nice gags and a few pretty visual gimmicks and overall seems relatively undercooled and emotionless. The roller coaster effects so popular for 3D animated films dominate too much, with the protagonists loudly screaming as they slither through ice channels or fall down somewhere, under which the at least rudimentary story is almost completely buried. This may work quite well with the little 3D fans, but in the long run it seems too tiring and lacks any form of originality.

No question, The Keepers of the Light is overall a nice animated adventure that offers smaller viewers aged 6 and up enough fodder for an enjoyable afternoon at the cinema. But you can tell the film is a purely commercial product that isn't designed to leave a lasting impression. Rather, it completely exploits a concept that currently works well, which is really a shame considering the basic idea of the story, which is nice in itself. With a little bit more charm and warmth a lot more could have been made out of the material, so that this adventure wouldn't have been just something for the quick movie hunger in between, but a movie you would like to watch again and again. Therefore: For children, who like colourful, fast and loud animated films, definitely worth seeing. For adult companions, there's at least the funny elves during the film and for the headache afterwards, their pharmacy has the appropriate remedy ready!

Cinema trailer for the movie "The Keepers of the Light (USA 2012)"
Loading the player ...