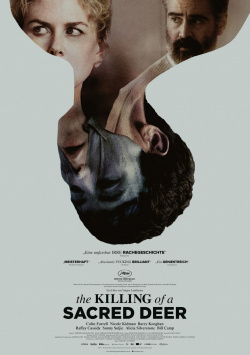 The Killing of a Sacred Deer

Successful heart surgeon Steven (Colin Farrell) has a secret: since the death of a patient, he has been seeing his patient's 16-year-old son Martin (Barry Keoghan) regularly. Steven feels guilty and wants to be a fatherly friend to the half-orphan. Steven's wife Anna (Nicole Kidman) takes a liking to the boy, and their mutual children Kim (Raffey Cassidy) and Bob (Sunny Suljic) also take a liking to Martin. But his vulnerable, charming facade begins to fall when his attempt to set Steve up with his mother (Alicia Silverstone) is shot down by the doctor. He places a curse on Steve's family, setting in motion a series of disturbing events.

Following the internationally acclaimed absurdity The Lobster - there's simply no other way to describe this film - director Yorgos Lanthimos now presents The Killing of a Sacred Deer, his first film made in the United States. Like his earlier works, this psychological thriller defies the laws of the mainstream. In an unconventional way, Lanthimos plays with motifs such as guilt and revenge and creates parallels to the Greek myth of Iphigenia in the course of the story. In order to appease the goddess Artemis, in whose sacred grove he had killed a stag, King Agamemnon is supposed to sacrifice his eldest daughter Iphigenia. Steven also finds himself in a similar situation, asked to pay his debt for the death of Martin's father by sacrificing one of his children.

What follows, after a somewhat plodding but thoroughly atmospheric beginning, is disturbing, mysterious, whimsical and intriguing - but also very exhausting. Lanthimos dismantles the idyll of the model American family with a mixture of jet-black humour and symbol-laden drama. In doing so, he creates a depressing mood that is even intensified by the occasional interspersed humor. While in other films humorous moments help to ease the tension a little, Lanthimos uses sarcasm and enigmatic wit to heighten the overall gloomy mood. How he manages to do this can only be described as extremely artful.

That does little to change the fact that some scenes come across as if they were bizarre just for the sake of being bizarre, as if they were incomprehensible just so that the film would in no way even come close to being straightforward entertainment. Certainly, meaning can be read into such moments as well. But it seems as if the argument that not everything should be explained to the audience is just an excuse to be as unadjusted and weird as possible. And that makes this work a very unwieldy and always highly exhausting film.

After all - and that is already reason enough for many friends of the unadjusted arthouse cinema to be enthusiastic about a film - The Killing of a Sacred Deer must be attested that it is not so easy to say here The film reminds me of. or This is clearly stolen from .... It is a very own work - in the positive, as well as in the negative sense. A worth seeing is absolutely deserved here - for friends of the more conventional entertainment cinema but definitely to be taken with a grain of salt.

Cinema trailer for the movie "The Killing of a Sacred Deer (Großbritannien/Irland 2017)"
Loading the player ...