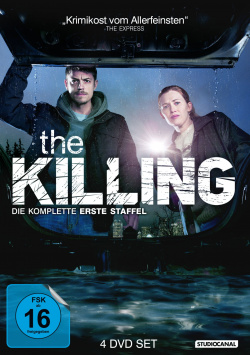 Film: Sarah Linden (Mireille Enos) is preparing for her farewell from Seattle because she wants to move together with her son and her fiancé and start a new job. Her last task will be to train her successor Stephen Holder (Joel Kinnaman). The disappearance of the 17-year-old pupil Rosie Larsen offers the perfect opportunity for a smooth relay handover. But when the girl is found dead and the tracks lead to the campaign team of the liberal politician Darren Richmond (Billy Campbell), who is running for mayor, Linden's departure is postponed until further notice. Because the fall draws ever larger circles, whereby always new abysses open up. While Linden and Holder try not to lose sight of the traces in the ever-increasing circle of suspects, the father of the dead student is driven to the edge of vigilante justice out of desperation. But the most dramatic part of the investigation has not been reached yet...

"The Killing" is the celebrated US remake of the Danish success series "Commissioner Lund - The Crime". The event was moved from Copenhagen to Seattle. Apart from that, "The Killing" sticks very closely to the original, which of course suggests the assumption that viewers who know the Danish original will be more bored here than tied up. But that is not the case. Even though there are so many parallels that there are no surprises, the series nominated for several Emmys and the Golden Globe often goes its own way. So even those viewers who already know the story are carried away by the search for the murderer of Rosie Larsen.

What the US counterpart does just as well as the original is the structure of the individual, interlinked storylines. One does not only follow the investigations of Sarah Linden and Stephen Holder, but also delves deeply into the world of the Larsen family, eaten away by grief and rage, or follows the efforts of the campaign team around Darren Richmond, that the damage to their candidate's image is limited by the connection to the murder. Therefore, the series is not only a dark thriller, but also a multi-layered drama, which is very entertaining.

All in all, the actors are absolutely convincing. Admittedly, Mireille Enos ("World War Z") is somewhat more colourless than her Danish colleague Sofie Gråbøl. This makes Sarah Linden less interesting as a character than Sarah Lund. But detached from the direct comparison, Enos delivers a similarly good performance as their co-stars Joel Kinnaman, Billy Campbell and especially Brent Sexton, who plays the victim's father, who is prone to violent outbursts, with great intensity in some scenes.

Whoever hopes that the case of Rosie Larsen is solved by the end of the first season will be bitterly disappointed. Because at the end of the 13 episodes there is still no clear perpetrator, but many possible suspects and traces, which in the second season will finally lead to the dissolution, which - so much be revealed - differs from that of the Danish original. Since the first season ends with an exciting cliffhanger, it's reassuring to learn that the release of the second DVD box will take place just one month after that of season 1. So the supply of serial junkies is secured!

Although "The Killing" isn't as thrilling as "Kommissarin Lund - Das Verbrechen", the makers of this remake have succeeded in creating a very good and atmospherically dense crime series, which can score with interesting characters, great actors and exciting twists. And that's why there is a deserved one for this first season: Absolutely worth seeing!

Picture + Sound: The technical realization of the series is very atmospheric. The colour scheme is a bit undercooled, which captures the oppressive mood of the story very well. The picture sharpness is on a good level for a current TV series. Although many things take place in the gloom, smaller details often also come into their own. The Dolby Digital 5.1 mix is also pleasantly atmospheric, with the voices sounding very directionally mixed. Ambient noises such as wind and rain and smaller sound effects ensure that the surround channels are also used to some extent. Good!

Extras: On the first DVD there is an (unsubtitled) audio commentary on the pilot episode by series creator and executive producer Veena Sud. The other extras are on the fourth disc. Here there is an extended version of the season finale (48:16 min. instead of 45:30 min.), which can be watched optionally with an audio commentary of the leading actress Mireille Enos and the producer and author Nicole Yorkin. While the extended version of this episode is available in English with German subtitles, there are no subtitle options for the second audio commentary. Finally, the disc has some edited scenes (approx. 12:28 min.), as well as a picture gallery to offer. In addition to these extras, the DVD also includes a first season episode guide.

Fazit: "The Killing" does not come close to "Kommissarin Lund". But even though the US remake sticks very closely to the Danish original in many moments, the series manages to build up its very own atmosphere, which is intensified by the intense play of some actors and the oppressive visual language. An extremely gripping mixture of thriller and drama, which in the end leaves many questions unanswered and makes waiting for season 2 a real test of patience. Who likes atmospheric crime food with interesting characters and a very complex story should not miss this first season of "The Killing" - and pre-order season 2 immediately!