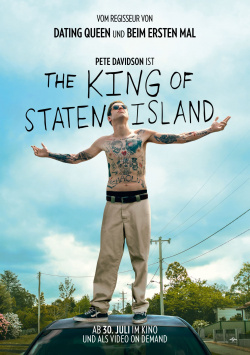 The King of Staten Island

The fact that, in his mid-twenties, he still lives with his mother (Marisa Tomei) and has no future career prospects, preferring to spend his days smoking pot with his buddies, doesn't seem to bother Scott (Pete Davidson). While his little sister (Maude Apatow) has left home sweet home to attend college, Scott's daily life is dominated by self-destructive thoughts. When his mother starts dating firefighter Ray (Bill Burr), it could throw Scott completely off track, as he is now forced to face the traumatic memories of his father's death, who was also a firefighter. And that has completely unexpected consequences.

US actor and comedian Pete Davidson, who got his big break on the cult show Saturday Night Live, gets to talk very freely about his own life in this comedy, for which he co-wrote the screenplay with director Judd Apatow. Like his film character Scott, Davidson is from Staten Island, suffers from Chron's disease and depression, and lost his father, a firefighter, when he was a young boy. Scott Matthew Davidson was killed in action during the September 11, 2001 attacks. In his stand-up programs, Davidson always deals with this trauma in a humorous way. He continues to do so in The King of Staten Island, while also striking much calmer tones.

Unlike Apatow's earlier films, the film is not a pure gag-fest. There are some very amusing moments, but overall a slightly melancholy tone dominates the proceedings. Not one that seems really depressing, the humor is too much in the foreground. But at least one that makes the character of Scott and his story seem authentic despite a certain exaggeration. This is important in that it allows Scott, despite being an extremely difficult and not exactly accessible character, to win the audience's sympathy relatively quickly. As a result, the film works from the somewhat bumpy beginning to the hopeful ending.

What the film has in common with Judd Apatow's other works is that it is far too long. Apatow just can't seem to direct movies that don't significantly exceed the two hour mark. The culprit is usually very long, not infrequently improvised dialogue that, while entertaining in its own right, doesn't add a damn thing to the actual story. In this case, too, some of these dialogues could have been cut completely, from which the plot wouldn't have suffered, even though the pacing would have benefited. The King of Staten Island may not be Apatow's best or most crowd-pleasing film. But it is entertaining, amusing and charming and for that it gets a well deserved: Absolutely Worth Seeing!

Cinema trailer for the movie "The King of Staten Island (USA 2020)"
Loading the player ...