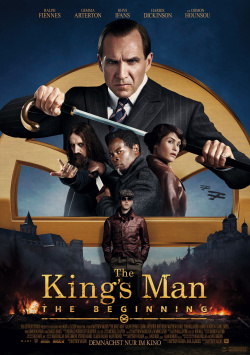 The King`s Man - The Beginning

In the early 20th century, the world is on the brink: in the shadow of World War I, the most ruthless tyrants and criminal masterminds are hatching a plan that could cost millions of lives. To confront this danger, Orlando Oxford (Ralph Fiennes), with the support of Shola (Djimon Hounsou) and Polly (Gemma Arterton), creates an independent secret service. It is the hour of birth of the Kingsman, which could be at the same time again their end...

Much more is to be revealed about the story of the prequel "The King`s Man - The Beginning". Matthew Vaughn, who especially with the first "Kingsman" moviehad served up a great mix of agent thriller, action and bitterly wicked comedy, this time makes use of some historical figures and events to knit from them the origin story of the secret service that Mark Millar and Dave Gibbons came up with for their graphic novels. There's no question that visually this works really well. There are some sets and effects here that offer quite great cinema. The rest, however, is a big disappointment.

Yes, there were also in the two predecessors next to the humorous very serious moments. But if the balance was just in the first film still perfect, it is here more than once completely off. Either the whole thing is extremely dark and brutal, or completely overdone and silly. The best example of the latter is the character of Rasputin, played by Rhys Ifans. There is a scene between him and Orlando, portrayed by Ralph Fiennes, that is simply hilarious. How Vaughn could take such embarrassing silliness into the finished film and then place it next to dramatic and tragic scenes from World War I remains a mystery to me.

As good as some of the scenes may be, it's annoying that the director allows himself some really gross gaffes. It creates an extremely inconsistent overall picture, which leaves more than once a bland aftertaste. And when the now obligatory end credits scene then reveals the identity of a mysterious character played by David Kross, you're downright afraid of what ideas Vaughn might throw out in a potential sequel.

As a fan of the "Kingsman" films (and other directorial efforts by Matthew Vaughn), I really wanted to like this prequel. I was looking forward to some bitter bad fun with great action and high show values. Yes, I got action and show values too - but the rest unfortunately doesn't work at all. And that's why there is a "Seeable" here only with very clear restrictions.