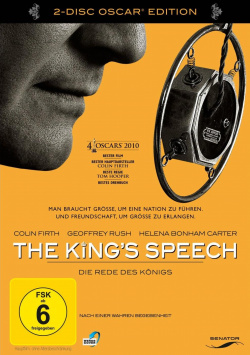 Film: There is actually one role for every actor throughout their career that is considered the role of a lifetime and instantly elevates the actor in question to a whole other realm. For Colin Firth, who many have previously associated with only one very specific type of role, despite having proven his versatility on numerous occasions, his portrayal of Britain's King George VI in The King's Speech is that one, all-changing role.

As the son of King George V, Albert (Firth), known only as Bertie to his friends, is always having to make speeches in public. In itself no peculiarity, but Bertie has a problem: he suffers since childhood from a severe stutter and brings especially under pressure hardly a word out. After all previous attempts at therapy have failed, his wife Elizabeth (Helena Bonham Carter) takes matters into her own hands and makes an appointment for her husband with the renowned speech therapist Lionel Logue (Geoffrey Rush) - incognito, of course. But Bertie finds it difficult to cope with the unconventional methods of the extremely direct Australian and so the treatment seems to be over before it has really begun. It is only later that Albert realizes that Lionel was indeed on the right track and he confides in the therapist again. Slowly, the treatment begins to bear fruit and a friendship develops between the two men that grows out of mutual respect. But when Bertie is appointed England's new king after the death of his father and the unexpected abdication of his brother Edward VIII (Guy Pearce), the men's learning, as well as their friendship, is sorely tested.

With The King's Speech, director Tom Hooper has created a near-perfect film. A wonderful blend of drama and comedy, a moving portrait of a male friendship, a superbly acted piece of cinema that uses great dialogue, an understatedly grand set and wonderful music penned by Alexandre Desplat to provide the viewer with almost two hours of spellbinding entertainment of the highest order. Hooper has managed the feat of telling a story based on historical events in such a way that the numerous historical information, such as the death of George V (wonderfully played by Michael Dumbled), is not lost on the audience. (wonderfully played by Michael Dumbledore Gambon), the problems surrounding the succession by Edward VIII. (Guy Pearce) and his abdication that followed shortly thereafter, or the emerging Second World War, are conveyed unobtrusively, almost incidentally. This cleverly prevents the film from coming across as dry or dusty in any way.

More to the point, the fact that an unusual friendship between two inherently disparate men has been brought to the fore here creates a warmth that quickly envelops the viewer and keeps them comfortably enveloped even after the credits roll. Admittedly, this is not only a credit to the wonderful production with all its different facets, but also to the two great lead actors. Colin Firth is perfectly cast here with his at times almost stoic manner. How he changes in Lionel's presence more and more from a stiff aristocrat to a normal human being with fears, weaknesses, humor and longings, Firth conveys in a very subtle and therefore wonderful way. Geoffrey Rush is the perfect foil, his Lionel Logue a very maladjusted man who is not intimidated by Bernie's social status. A fantastic screen duo that is hard to get enough of.

It would be a shame, however, to leave Helena Bonham Carter unmentioned here. Admittedly, the two male actors are clearly in the foreground. But it is Queen Elizabeth, embodied by Carter, who always steers her husband in the right direction, supporting him without putting herself out there. And that's exactly what Carter does: her performance is particularly supportive of Firth's, yet she always remains discreetly in the background, leaving the playing field to the two men despite her engaging presence.

The King's Speech is a real gem. An entertainment film that has found its audience in arthouse cinemas as well as multiplexes, it is a film that is simply fun to watch, warms the heart and does not offend the mind. After the surprising success in the USA and the less surprising success in England, cinema-goers in Germany have fortunately also realised that a good film needs neither special effects, nor 3D, nor Til Schweiger or funny animated animals to justify the purchase of a ticket. And that's why it's also worth grabbing the home cinema version. Absolutely recommended!!!

Image + Sound: The technical realization of the film has turned out satisfactorily on the DVD. The picture is very sharp and has a pleasant sharpness. The great equipment comes thanks to the harmonious coloring and the good contrasts coherently to the validity. The sound is rather restrained according to the story, but dialogues, music and ambient sounds are very good and result in a coherent and engaging sound image. Very good!

Extras: The single DVD has no extras to offer apart from the interesting audio commentary by director Tom Hooper, which can be viewed with optional subtitles. The 2-disc Oscar edition, on the other hand, has more bonus material to offer, as does the Blu-ray variant. In addition to an interview session recorded in front of an audience with the director and his cast, there is och a standard promotional making of, the recording of the King's real speech, as well as the post-war speech of King George VI. In addition, Mark Logue, the grandson of the real Lionel Logue, gives an interview about the story of his famous grandfather. The trailer of the film closes the bonus offer. Still to be mentioned is that the main film is also offered in an audio film version, which can be selected directly after inserting the film.

Conclusion: The four-time Oscar winner The King's Speech is also a must-see in the home theater version. The award-winning main film is technically very well implemented, in the bonus material especially like the insights into the historical background. If the film itself is enough for you, the single DVD is absolutely sufficient. But if you want to know more about the film or want to hear the real King's Speech, you can't miss the double DVD or the Blu-Ray. Absolutely recommendable!