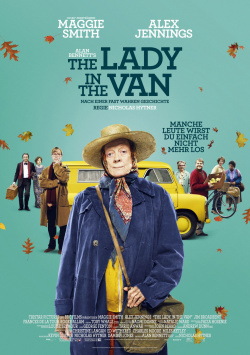 The Lady in the Van

When playwright Alan Bennet (Alex Jennings) moves into his new cottage in a quiet part of London, he has no idea what is in store for him very soon. Because in his street also lives the cranky Miss Shepherd (Maggie Smith), who lives in her dilapidated van and always sets up for several weeks with her mobile living room in front of one of the houses in the neighborhood - the use of the house's own facilities included. Soon it hits Alan too, who is admittedly less than thrilled about it. When the city imposes a parking ban on the street, Miss Shepherd should actually move on. But then Alan is persuaded to let her park in his driveway. And thus begins an unusual and not always easy live-in relationship that will last for 15 years.

The Lady in the Van is actually based on a true story, written down by noted playwright Alan Bennet after the death of the real Mary Shepherd and later turned into a play. In it, Maggie Smith has already shone on stage at the Queen Theatre in London, directed by Nicholas Hytner, who later adapted Bennet's hit play History Boys for cinema. Now the team of Bennet, Hytner and Smith have teamed up once again to bring Miss Sheperd's story to life in the very locations where her real van once stood. The result is nice feel-good cinema with an outstanding Maggie Smith.

With a coherent mix of plenty of dry humor and quiet drama, the story shows how an intrinsically strange person can become an important part of others' lives almost unnoticed, and that behind every fate there can be a very fascinating story. One is quickly inclined to dismiss Miss Shepherd as a crotchety old woman whose behavior and stern odor do not necessarily make her the company one would like to surround oneself with. However, as it is gradually revealed what caused the old lady to lose her footing in life, one begins to see Miss Shepherd through a very different set of eyes and to better understand her sometimes gruff behavior.

The problem with the film is that it attempts to cover a 15-year period in just 100 minutes. While some scenes are almost too leisurely staged, other aspects of the story are rushed off. At times, this creates a somewhat unbalanced narrative flow, which also diminishes the emotional impact of the whole thing. But the very good acting of the cast and quite a few quite wonderful little moments largely console over this shortcoming. The Lady in the Van is not a masterpiece, but it offers nice entertainment for all lovers of British art house cinema. If you can't get enough of the delightfully biting Maggie Smith, as we know and love her from Downton Abbey, you shouldn't miss this charming work. Worth seeing

Cinema trailer for the movie "The Lady in the Van (Großbritannien 2015)"
Loading the player ...