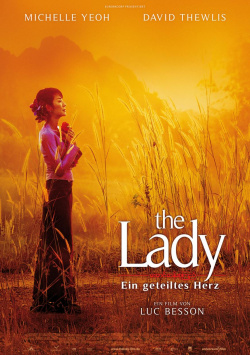 Until the late 1980s, Aung San Suu Kyi (Michelle Yeoh) observes conditions in her native Burma from her safe home in Oxford, where she lives a happy life with her husband Michael Aris (David Thewlis) and their two sons. But when she travels back to Burma after her mother suffers a stroke, she can no longer stand by and watch the country her father once died to defend as independent suffer from unrest and oppression. And so Suu Kyi is persuaded by opponents of the regime to become the leader of a newly formed party. Although her election campaign is dominated by threats, arrests and violence against her supporters, Suu Kyi fearlessly campaigns for a democratic Burma. But her victory in the elections is not recognised by the military and Suu Kyi is placed under house arrest. She is initially allowed to maintain contact with her family, but this privilege is soon revoked. Michael's attempts to fight for his wife and her cause from England bear fruit a few years later: in 1991 Suu Kyi is awarded the Nobel Peace Prize. But with that, the fight for freedom for Suu Kyi and the people of Burma is far from won.

The Lady has many positives. The true story on which the film is based is highly interesting, exciting and moving. Augn San Suu Kyi, who was recently elected to Burma's parliament with her opposition party NDL after more than twenty years of resistance, is a strong and admirable woman, embodied with passion and acting devotion by Michelle Yeoh. In addition, the film boasts some powerful visuals and no less powerful supporting cast. In particular, David Thewlis, best known as Remus Lupin from the Harry Potter films, fills his character with an emotional power by which the viewer is quickly gripped.

However, this biopic struggles with a significant problem. Luc Besson's direction is simply too conventional to do the true story justice. It's not that the staging is bad or overly shallow. Rather, it seems as if Besson has gone too much by the standard formulas for biopics, which may have allowed him to tick off all the important stages and incorporate all the significant information into the story. However, this in turn leads to a certain superficiality, as many events from a long time span have been squeezed into a relatively short time. In addition, the unsurprising direction makes for some noticeable lengths, from which the entertainment value of the film suffers noticeably.

Surely, the story itself and the strong lead actress are reason enough to recommend this film to all those interested in Augn San Suu Kyi and the situation in Burma. But those who hope that the life of a strong woman like the Nobel Peace Prize winner also guarantees a strong film biography will probably leave the cinema disappointed. Nevertheless: a bit dry, but with deductions still worth seeing!

Cinema trailer for the movie "The Lady (Frankreich/Großbritannien 2011)"
Loading the player ...