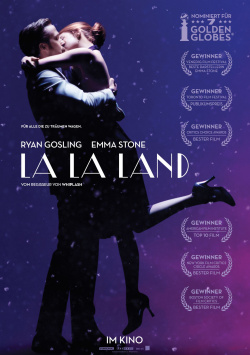 Mia (Emma Stone) is an aspiring actress, always hoping for her big break. Sebastian (Ryan Gosling) is a jazz musician at heart, dreaming of his own club. But the two have not yet found happiness in Los Angeles - until their paths cross several times and they fall madly in love with each other. It all looks like a great love story with a happy ending. After all, this is the city of dreams, where anything is possible! But as they get really close to their big dreams, Mia and Sebastian have to realize that success doesn't come without sacrifice - and in this case, that sacrifice could be their love.

Just awarded 7 Golden Globes, La La Land is a truly wonderful film. It's a tribute to L.A., to the great era of musical cinema, and to the power of love and music. However, Damien Chazelle's (Whiplash) film is so much more. The whole thing starts out as a joyfully colorful musical. The wonderful opening sequence, for instance, shows how nice it can be to be stuck in traffic during rush hour. And the first encounters between Mia and Sebastian are full of wit, culminating in a playful approach to romance as their love awakens. It's so beautifully cheesy that as an audience member, all you really want to do is embrace the world in song. The songs are catchy, the choreography is enchanting, and the imagery is literally fabulous.

And when they finally get each other, the story is at a point where most movies actually end. Yet here La La Land continues. With a different tone, though. The musical interludes become less frequent and are more melancholy. The love story comes back from the colorful fairy tale world to the hard ground of reality. And instead of grinning all the time, some of the viewers may find themselves in tears from time to time. For example, during the scene in which Mia tells/sings a story about her grandma at a casting. A real goosebump moment that Emma Stone serves up just great.

The story then takes a turn that really rips your heart out, especially because of the wonderful first half of the film. And then comes the last ten minutes. Not to give too much away here, of course, but the montage on display is so incredibly beautiful, sad and true to life that it lingers for an extremely long time. It makes you see the events of the film through a completely different set of eyes, and restores a little bit of dreaminess and lightness to the great melancholy of the second half of the story. And that's exactly what makes La La Land such a special movie experience in the end.

Chazelle has pulled off the feat of telling a love story that is uninhibitedly playful and campy on one hand, but uncompromisingly realistic on the other. It's a film that, even despite some sad moments, simply makes you happy and brings some colour into the grey everyday life. With a wonderful duo of actors, who are acting together for the third time and who have the right chemistry, with a wonderful soundtrack and an enchanting visual language, which is rarely seen in cinema. For this we give it a very clear: Absolutely worth seeing!!!!!