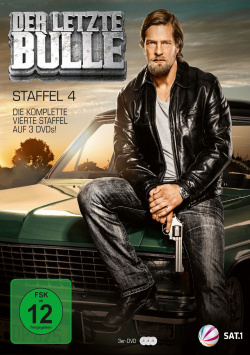 Content: Mick Brisgau (Henning Baum), the policeman who fell into a coma in the 80s after being shot at and who woke up 20 years later in a very strange world, is back. After three years of arranging himself in his very special way with the modern police service and his new partner Andreas Kringge (Maximilian Grill), he quit the police service at the end of season 3. The breach of trust is too serious for Mick, after he found out that Andreas, his superior Martin Ferchert (Helmfried von Lüttichau) and his heart lady and president Tanja Haffner (Proschat Madani) kept it from him that they knew the identity of the man who shot him over 20 years ago. Now Mick lives secluded in a hut in the woods. All attempts to persuade him to return have failed. Only when a murder is committed with the same weapon with which Mick was once shot does "The Last Bull" return to active duty.

After finding out that the former shooter, the little criminal Schaller, did not act on his own, but was commissioned by a mysterious mastermind to murder Mick, the charming macho now does everything he can to solve the twenty-year-old case and finally find his peace. In addition, he and Andreas also have to solve the murder of a private detective who investigated the disappearance of several parcel delivery vans, have to deal with a dead sperm donor, extortion of protection money and a poisoned homeless person or find out whether a supposed suicide attack was really a terrorist act. In addition, Andreas finally becomes a father and at first seems a little overwhelmed with this new role. And with the controller Steffi Averdunk (Franziska Weisz) comes a new woman in Mick's life, who gets on his nerves at first, but then turns his head all the more violently...

Afterwards "The last "bull" in season 3 had shown first signs of fatigue and the concept of the series seemed to be a little worn out, the makers in season 4 tried to enrich the proven ingredients with a little fresh wind. What has remained is a mixture of classic crime format and humour, soundtrack from the 80s and cool sayings. The case about the shots at Mick, the liaison with Steffi and the father pleasures of Andreas are a welcome enrichment for the series. There are some moments that don't really work, like the birth of little Karl or the way Steffi says goodbye to the series (for the time being?). But by and large the series can still keep the level of the first season loose even in the fourth year.

Of course, this is also due to the good chemistry between the actors, whereby especially Henning Baum, who in the last episode is even allowed to play a bit of James Bond during an undercover assignment in a casino, again proves to be the ideal cast for the policeman with the old-fashioned macho charm. It is also very nice that a real male friendship slowly develops between the former rivals Brisgau and Meisner, which provides for some very nice moments between the two. If the makers now present the humour a little more subtly, since in some scenes they run the risk of drifting into Klamauk due to the actors' facial expressions and the staging, then nothing stands in the way of a successful fifth season!

image + sound: The image on the DVD also moves back to a good TV level in the fourth season. There is no contamination or interference, the image sharpness is satisfactory and the colour mixing is very harmonious. Of course, the stereo sound is dominated by the dialogues and the good soundtrack, whereby both sound clearly and powerfully mixed from the speakers. Good!

Extras: On the third DVD there are some extras worth seeing, which will surely be fun for fans of the series. The focus is on some more detailed interviews with Henning Baum (approx. 8 min.), Maximilian Grill (approx. 6 min.), Robert Lohr (approx. 5 min.), newcomer Franziska Weisz (approx. 4 min.), Proschat Madani (approx. 3 min.), Tatjana Clasing (approx. 2:30 min.) and Helmfried von Lüttichau (approx. 4 min.). Although not all questions really offer depth ("Can you cook?"), the viewer is offered very entertaining and sympathetic interviews. Also amusing are the 14-minute outtakes, which have some very funny moments to offer.

Finally there is the first episode of the fourth season with an audio commentary by Henning Baum. Sadly, the actor doesn't give any insight into the production, but mainly explains the story, which also goes along with some longer breaks. A joint commentary with Maximilian Grill or with authors or directors would certainly have been more interesting and entertaining. Nevertheless, the fact that the fans are offered such an extra at all is quite commendable.

Result: The fourth season of "Der letzte Bulle" still works very well. The proven mixture of crime thriller and comedy, enriched with very likeable characters, is just fun, even though not all scenes work out equally well. A few new storylines and a new heart for Mick ensure that the series remains exciting and entertaining in its fourth year. On DVD the thirteen new episodes present themselves in good picture and sound quality and on Disc 3 there are also some nice extras, which fans will surely be happy about. Therefore: if you already liked the season 1 - 3, you simply can't get past this box! absolutely recommended!