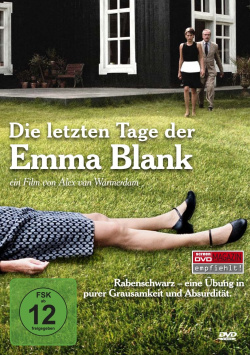 Film: Emma Blank (Marlies Heuer) probably doesn't have long to live. She wants to spend her last days in her stately country house, surrounded by her servants. They have to put up with a lot from their mistress, who makes absurd and sometimes very humiliating demands on her subordinates. For example, she forces her servant Haneveld (Gene Bervoets) to glue on a moustache in order to look more like a real servant. Cook Bella (Annet Malherbe) has to prepare food that is difficult to digest, only to be reprimanded by Emma when she gives it away again. Theo (Alex van Warmerdam) has the thankless task of living like a dog, which maid Gonnie (Eva van de Wijdeven) has to walk regularly. When Gonnie complains about her boss's abstruse demands, she is immediately put in her place by the other servants. But for what reason does the staff allow themselves to be treated so inhumanely? Love for their boss or pure goodness is certainly not the true motive...

The Last Days of Emma Blank is a bitterly wicked comedy about greed, emotional coldness and psychological terror, with no winners in the end. The film's protagonists are all driven by base motives and experience no catharsis in the course of the story. And therein lies the reason why the film, which director Alex van Warmerdam himself describes as a tragicomedy with horror and farce elements, works so well. The film is wicked from start to finish, not crampedly trying to serve up a moral message with comforting sugarcoating.

The laughter gets stuck in the viewer's throat many a time. Gradually, van Warmerdam reveals the connections and actual motivations. The clearer the story unfolds, the more bitter the humour becomes. The director, who also wrote the script and can be seen in the role of Theo, relies on quiet, almost laconic wit. The fact that he doesn't use a sledgehammer intensifies the maliciousness of the whole thing.

The good actors, the beautiful landscape, which feigns a deceptive idyll, and the story, which is original until the bitter finale with its numerous surprising revelations, make The Last Days of Emma Blank an insider's tip for all lovers of black humour. Worth seeing!

Image + Sound: The DVD's image is largely clean and has decent overall sharpness, revealing some weak points only in the detail. The colouring, on the other hand, is consistent throughout and the shots of the beautiful scenery in particular come across well here. The sound is rather unspectacular in large parts, very quiet scenes alternate with rather sparse dialogue. Only a few ambient noises here and there provide a little movement in the tonal events, which comes with the Dolby Digital 5.1 track of the German language version also well. Overall, there is a satisfied for the technical implementation: good!

Extras: As a bonus, there is a making of, which, however, can only be viewed in the Dutch original without optional subtitles.

Conclusion: The Last Days of Emma Blank is a bitterly wicked comedy about greed and human abysses, which manages to hide its deeply biting character behind the worn staging, especially at the beginning. There are rarely loud laughs, but this black comedy is still fun to watch. A real insider tip, which is presented on the DVD technically neat. Only the lack of subtitle options in the main film and the bonus material are really negative. Nevertheless, the bottom line is: for lovers of slightly weirder arthouse comedies absolutely recommended!