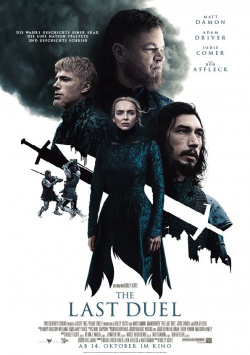 The duel between Jean de Carrouges (Matt Damon) and Jacques Le Gris (Adam Driver) was the last court-ordered duel in France. It was a battle between two former friends who became bitter enemies through infighting and envy. When Carrouges learns that his wife Marguerite (Jodie Comer) was raped, he goes to court in Paris to challenge his former friend to a duel before the king. In doing so, he is primarily concerned with his honor. But even though she herself is threatened with death if her husband is defeated, Marguerite is not prepared to keep quiet and let Le Gris get away with it. And so the duel to the death puts the fate of all three in God's hands.

"The Last Duel" is Ridley Scott's new film based on true events. The titular duel took place on December 29, 1386, and is fairly well-reported. Author Eric Jeger published a book about this duel in 2004, which also served as the template for this film. Scott divides his film into three chapters, each telling the events from a different point of view. First, the "truth is reported from the point of view of Jean de Carrouges", followed by that of Jacques Le Gris. Finally, Chapter Three is then the "Truth from Marguerite"'s point of view, which is then briefly dubbed "The Truth" in a distinct positioning.

Although some scenes become repetitive due to this narrative style, the film is never boring at a stately running time of around two and a half hours. This is because it is precisely the different perspectives on the events that make the whole thing extremely involving and also exciting. Sometimes the differences are only minimal, expressing themselves in a change of facial expression or a different tone of voice in what is said. The impact that even such small differences have on the big picture, however, are enormous and make up the real genius of the production, but also of the script penned by Ben Affleck, Matt Damon and Nicole Holofcener.

The acting of all involved must also be particularly emphasized here. Because especially Jodie Comer, Matt Damon and Adam Driver have to create their characters differently depending on the perspective - sometimes in nuances, but in some scenes completely different. While Jean de Carrouges, for example, sees himself as a chivalrous hero and caring husband, Le Gris and his wife Marguerite see things very differently. Here, it really pays to pay attention to even the smallest differences in facial expressions, gestures and language in every scene to realize how good "The Last Duel" is. It is a film from a grim past where rape was not considered a crime against a woman but against her husband, where a woman's word carried virtually no weight (especially if it was "No"), and where conflicts were resolved not with reason and justice but with violence. And unfortunately, unfortunately, throughout the whole film there is a certain topicality that cannot be denied.

So, after some good (and also some not so good) entertainment films, Ridley Scott has once again created a work with real substance that makes you think, but thanks to its visual realization and the great ensemble also knows how to entertain. A clear case of: Absolutely worth seeing!