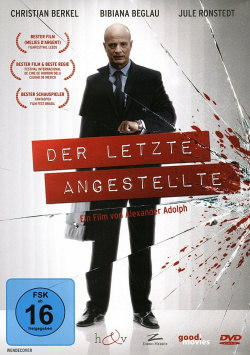 Film: For some time, the once successful lawyer David Böttcher (Christian Berkel) has been looking for a new job. If some money doesn't come back into the household coffers soon, he and his wife Irina (Jule Ronstedt) will have to move out of their beautiful home with their son Simon (Leo Conzen). At the last moment, David gets a job offer that is morally hard for him to swallow, but would secure his financial future for the near future. He is to take care of liquidating a once lucrative company and laying off all the employees. Mrs. Blochs (Bibiana Beglau), one of the former employees, in particular, seems reluctant to simply accept this. She makes open threats against David, stalks him and terrorizes him with phone calls. When he goes to confront her at her home, David finds only her dead body. Apparently, Mrs. Blochs took her own life. For David, however, this is where the nightmare really begins...

The Last Employee is a gripping mix of psychological thriller and drama, laced with some effective horror elements. And it is this blend that makes the film stand out from the crowd of German productions. Director Alexander Adolph dares to leave the beaten track and thus surprises the viewer again and again. Admittedly, there are some moments that seem a bit forced or in which the acting of the actors seems a bit wooden. But these small weaknesses pale in the end in view of the very positive overall picture, which is strengthened not least by the gratifyingly consistent end.

Adolph succeeds very well in building an oppressive atmosphere, which he breaks up again and again with good moments of tension or small shock effects effectively. The fact that there is relatively little blood flow makes the moments in which things get a little more violent all the more effective. But the film doesn't only work very well as a horror thriller, but also as a social drama. The fear of losing one's job, which has become a part of everyday life for many people, is worked very well into the supernatural story here. The fact that the sometimes very cowardly way some companies lay off even long-time employees is used as the basis for a horror thriller was actually long overdue and is an idea as obvious as it is original.

The good acting of lead actor Christian Berkel, who always seems to balance close to the border of insanity, the atmospheric staging and the exciting as well as surprising story make Der letzte Angestellte a refreshing contribution of young German cinema despite minor weaknesses like logic holes or the effort of some rather worn-out clichés. Absolutely worth seeing!

Image + Sound: The implementation of image and sound are overall on a good, but not particularly spectacular level. The picture is clean, the colors atmospherically reduced, and the sharpness is also for long stretches on a good level. Here and there is a little noise, but it has only a slight negative effect on the overall impression. The sound remains restrained over long stretches, which makes the purposefully used sound effects all the more effective. Good!

Extras: Except for the trailer, there is unfortunately no bonus material on the DVD.

Conclusion: The Last Employee is a real surprise. The mix of psychological thriller, drama and horror is a refreshing and extremely exciting change in German film. While there are a few slight dramaturgical hangs and logic holes, these weak points are easily forgiven by the film's bottom line. The DVD is technically well made, only the almost non-existent bonus material is a bit negative. Nevertheless: for lovers of mystery thrillers and very special films from Germany absolutely recommendable!