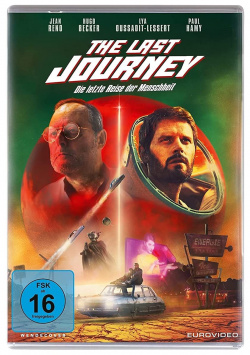 Movie: In a not-too-distant future, when Earth's resources are depleted, a mysterious planet suddenly appears above Earth - the Red Moon! It offers humans new resources, called Lumina. But then the planet suddenly changes its orbit and heads straight for Earth. There are only a few days left until the final end of the world. There is only one astronaut who could avert it, but he has disappeared without a trace. Paul W.R. (Hugo Becker) travels the barren land, driven by a vision to save the world. He receives support from teenage girl Elma (Lya Oussadit-Lessert), while his father (Jean Reno) does everything in his power to ensure that Paul embarks on the mission after all...

With "The Last Journey - The Last Journey of Mankind", director Romain Quirot presents the feature film version of his 2015 short. While there are some weaknesses dramaturgically, which can also be attributed to the sprawl of the story, visually the film is truly magnificent. Quirot creates a very special atmosphere with his images, which on the one hand is full of beauty, but on the other hand is also filled with a comprehensible menace. One is downright hypnotized by the sight of the red moon on the horizon, but also senses the fate that lies ahead for mankind.

This is where the film draws its very great strength, which, however, cannot compensate for some dramaturgical weaknesses. The staging itself seems to get lost in the frenzy of the images, so that the story just seems a bit half-baked at some points. There is indeed a certain explanation why Paul W.R. has such an importance in the mission. But why he of all people is the only one who can fly a spaceship to the Red Moon remains as open as the meaning of his visions. Admittedly, you can interpret a lot into it yourself. But a few clearer clues would have been quite helpful.

"The Last Journey - The last journey of mankind" tries a bit too uptight to be artful sci-fi cinema, which does not always work and unfortunately comes at the expense of the entertainment value. Nevertheless, the great effects and the sweeping atmosphere give the story enough traction to work despite the weaknesses. So if you like somewhat quieter, more cerebrally told dystopias, you should definitely take a look here: Worth seeing!

Image + Sound: Sometimes earthy, then again brightly colored colors visually set the tone. These come across well on the DVD. The picture is overall very sharp and can also convince in terms of image depth and contrast. In darker scenes, there are minimal deductions in the sharpness of detail. The sound is present in a decent Dolby Digital 5.1 mix, which is dominated by the soundtrack and a rousing soundscape in many scenes. The dialogue is well matched to this. All in all, a deserved: good!

Extras: As an extra, there are some interviews (approx. 26:08 min.) in addition to the trailer. However, these are only in French without subtitles and can therefore only be enjoyed by interested parties with a good knowledge of French.

Conclusion: "The Last Journey - The last journey of mankind" is a visually stunning dystopia, which, however, leaves some questions open at the end. Nevertheless: alone the great images and the soundtrack with its 80s vibes give the film a very special touch. The DVD is convincing from a technical point of view, but the lack of subtitle options in the bonus material is a negative. But the bottom line is quite clear: Recommended!