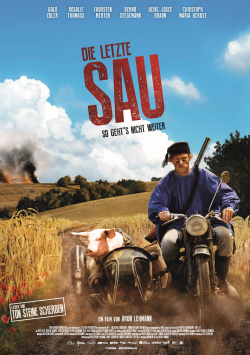 Things are not looking good for the Swabian pig farmer Huber (Golo Euler). First his beloved Birgit (Rosalie Thomass) has moved to East Germany and then he has to learn that his family's farm is broke. And just when things couldn't get any worse, a meteorite falls directly into his barn. Now he's faced with nothing. Only one last sow is left to him. Together with her, Huber leaves his home and starts a new life as a rebellious vagabond. Maybe he can change something this way, set a sign against the big ones who consciencelessly destroy little ones like him. Because one thing is clear: it can't go on like this!

With The Last Sow, director Aron Lehmann presents an anarchic road movie that tells its story as a mixture of biting satire, very wry humour and quiet drama. Huber is a kind of Don Quixote, for his attempt to take on the great and powerful is truly a battle against windmills. But of course, that doesn't stop him from his crusade. This has moments of wonderful absurdity that are all too rare in German cinema. But there are also scenes in which the mirror is held up to society in an almost painful way. In such moments, the film reveals a profundity that is cleverly constructed and that can further underpin its interesting message.

Lehmann offers its viewers plenty to laugh about and to think about. But towards the end, the whole thing loses its bite and seems too overconstructed, almost chaotic. It seems as if Lehmann wanted to catch up with the rather carried, almost laconic pace of the beginning in the last act in order to pack everything he wanted to tell into the 86 minute running time. While this still has a certain appeal, it doesn't work nearly as well as, say, the first half hour.

There's no question that The Last Sow is a very unusual film that may be a bit too special for mass tastes. But if you like quirky and delightfully mischievous comedies with depth, you shouldn't miss this amusing mess. And that's why, despite some weaknesses, there's a good one at the end: Worth seeing!

Cinema trailer for the movie "The Last Sow (Deutschland 2016)"
Loading the player ...