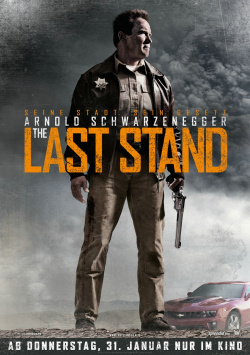 In recent years, the Terminator quote I'll be back seemed to be Arnold Schwarzenegger's catchphrase. Whether at political events as governor of California, movie premieres, or interviews, whenever a microphone or camera was nearby, Schwarzenegger would let his I'll be back ring out. Now he's finally put his money where his mouth is, delivering his true cinematic comeback as an action star with The Last Stand, following small guest appearances in The Expendables 1 + 2.

Directed by Kim Jee-Woon (I Saw the Devil), Schwarzenegger plays Sheriff Ray Owens, who keeps law and order in the small town of Sommerton Junction near the Mexican border. Owens and his team don't have much to do. Rescuing a cat from a tree or writing up parking violators is already considered a high point for the Sommerton Junction police. But then powerful drug lord Gabriel Cortez (Eduardo Noriega) manages to escape from the hands of the FBI during a prisoner transport. And his route to Mexico will take him through Sommerton Junction, of all places. Though FBI Agent John Bannister (Forest Whitaker) doesn't believe a bunch of small-town cops can stop the drug lord and his men armed to the teeth. But as his attempts to recapture Cortez fail miserably, soon only Owens stands between the gangster and his Mexican refuge. And so a bloody duel looms, with the drug lord and his army only seemingly at an advantage.

The Last Stand almost seems like a promotional film for the American gun lobby. The absurd statement of an NRA spokesman that a bad man with a gun can only be stopped by a good man with a gun seems to be the overriding leitmotif of the film, as even a lovable granny picks up a gun to support Arnie in the fight against the bad guys. The Last Stand could therefore be seen as a contribution to the current discussion about the tightening of gun laws in the USA. And given the horrific events that have claimed so many innocent lives in recent weeks and months, it's hard to see a film like The Last Stand as anything other than a political issue, but as a simple entertainment film. But since Kim Jee-Woon doesn't want to make a political statement, but rather entertain in an admittedly simple, but effective way, genre fans shouldn't question the whole thing, but simply switch off their brains. Because only then they can enjoy this absolutely solid thriller with good action, some humor and wonderfully illogical shootouts adequately.

Whether it's the spectacular escape of the drug lord, the duel of good versus evil in the middle of the almost extinct small town that seems like a modern western, or even the way Arnold Schwarzenegger flirts with his age, all this makes The Last Stand a highly entertaining representative of its genre. Admittedly, some scenes overshoot the mark in the truest sense of the word. Especially the character of the gun nut Lewis, played by Jackass Johnny Knoxville, is overdone and sometimes seems a bit too silly. Admittedly, the film never really takes itself seriously. But Knoxville's capers, while occasionally quite amusing, often feel like a foreign body in the otherwise very coherent overall picture due to their over-the-top nature.

Although The Last Stand comes across overall as a representative of classic 80s action cinema, the action itself never feels dusty or antiquated. True, the bounds of logic are repeatedly overridden. But still, the car chases, the gunfights and duels are worth seeing and extremely entertainingly staged, which also consoles over the arguably clichéd character drawing and the rather simplistic dialogues.

Whoever manages to leave the brain at the box office and turn on again only after the credits, who doesn't question the whole thing too much, will get good action cinema here with an Arnold Schwarzenegger who still knows his craft well. In Germany, however, only a version shortened by a few seconds comes into the cinemas. Fans can hope for an uncut FSK 18 version only with the DVD and Blu-ray exploitation. Despite the cuts, however, there is also for the 16er cinema version a: well worth seeing!