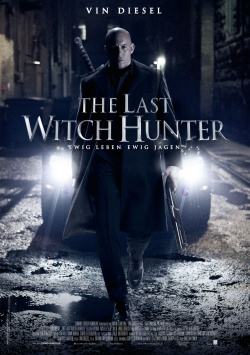 Many centuries ago, the witch hunter Kaulder (Vin Diesel) managed to destroy the powerful Witch Queen (Julie Engelbrecht), only to be cursed with eternal life by her. Since then, he has fought ceaselessly for the Brotherhood Axe & Cross to continue protecting humanity from the dark forces of the witches. Always fighting at his side is a spiritual companion known as a Dolan. When Dolan the 36th (Michael Caine) is placed under a deadly curse, Kaulder realizes that the witches are planning something big. Together with Dolan the 37th (Elijah Wood) and the help of the young witch Chloe (Rose Leslie), he goes into battle to save Dolan the 36th and save humanity from the return of the Witch Queen. But against the ever-growing army of witches, even Kaulder seems powerless.

With The Last Witch Hunter, Vin Diesel aims to follow up Fast & Furious, Riddick and xXx (which will be continued shortly) with another franchise that should draw fans to the cinemas in droves. Whether or not it succeeds may well be in doubt. Because even if the action-heavy witch hunt does have some entertainment value to offer, the new film from The Crazies director Breck Eisner is not much more than a trashy B-movie. In addition to some atmospheric images of New York, a small pinch of self-irony and an interesting supporting character convincingly portrayed by Rose Leslie (Game of Thrones), clichéd dialogue, rather wooden acting and enormous logic holes dominate the action here. And also the only conditionally successful special effects can tear out there only little.

Sure, the whole thing is a fantasy story, there one should not take it with the logic quite so exactly. But when the characters are drawn very one-dimensional and the dialogues are hard to beat in flatness, which then makes the viewer concentrate on other aspects of the film, then the lack of logic is just more noticeable even in fantastic stories. Even if Eisner does a lot of things right in terms of pure craftsmanship, the script (which actually had three writers working on it), the effects and the actors are just too weak to give the film the tension and coolness it would have needed to be a big success.

Sure, Vin Diesel is once again extremely cool in at least the scenes where he doesn't have to fight the Witch Queen with his beard glued on. And it is then also thanks to him that some in itself completely stupid moments are really fun. But even a Diesel can't pull the cart out of the mud here in the end. And it would have to go with witchcraft, if this work manages to storm the cinema charts. If you're just looking for entertaining fantasy fun of the very simple kind and don't mind flat dialogues and worn-out clichés, but are amused, you can confidently go on a witch hunt in New York with Vin Diesel, despite all the weaknesses. But if you already found Hansel & Gretel: Witch Hunters unbearably dull, you should also give this one a wide berth!

Cinema trailer for the movie "The Last Witch Hunter (USA 2015)"
Loading the player ...