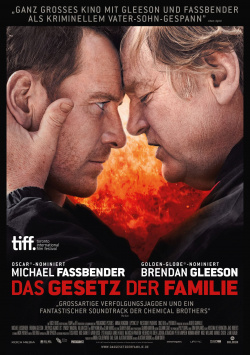 The Law of the Family

For a long time, the members of the notorious Cutler clan have lived in the Gloucestershire area of England. And always the family with its criminal machinations is a thorn in the side of the local police. Chad (Michael Fassbender) doesn't really know any other life, but he wants to offer his children a better future. Chad has great respect for his father, the clan leader Colby (Brendan Gleeson), and he loves him. But he also knows that in Colby's environment he can't guarantee a safe home for his children. But the clan chief won't accept his son breaking with family tradition. Instead, he wants to talk him into a very big score - and Chad must now decide whether he wants to continue to stand in his father's shadow or whether now is the time for a life of his own.

How far can family tradition go? To the extent that one's own children are actually born into a criminal career? Or is there an escape from such tight family clans without having to give up one's own identity, which is strongly shaped by the family? Director Adam Smith explores these questions in The Law of the Family. Served with humorous undertones, the family drama relies primarily on atmosphere and quiet character moments. Every now and then, however, something that can be restrainedly called action comes into play. But if you're hoping for a fast-paced gangster drama with plenty of lead-filled scenes, you're sure to be disappointed.

The fact that there are actually hardly any likeable characters makes it difficult to engage with the story. Sure, Chad has good ambitions. Still, he's a criminal who doesn't always make the best decisions for his kids. Only his wife (Lyndsey Marshal), who sometimes stands up to Colby when her husband chickened out again, is anything like a genuine sympathetic figure. The fact that the audience doesn't really want to warm up to the characters, at least at the beginning, doesn't change the fact that all the actors deliver excellent performances. First and foremost Brendan Gleeson, who is convincing as the bossy clan chief.

The Law of the Family shows very well that for people like Chad, freedom does not necessarily begin at the prison gate. It's a commodity he has to fight for. He is the tragic hero of a story that, while engaging, is still told a little too sluggishly. But the visuals, which make for a very special atmosphere, the very good actors and some truly great scenes ensure that at least some of the plodding moments can be forgiven. And that's why the bottom line is still a decent: Worth seeing!

Cinema trailer for the movie "The Law of the Family (Großbritannien 2016)"
Loading the player ...