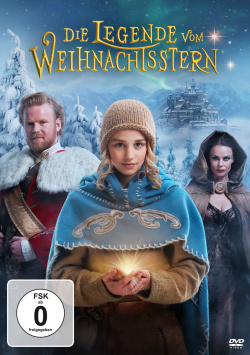 The legend of the poinsettia - DVD

Film: When the young princess Goldhaar is cursed by an evil witch (Agnes Kittelsen) in search of the poinsettia and disappears without a trace, a world collapses for the royal couple. The queen dies of a broken heart and the king (Anders Baasmo Christiansen) falls into a never-ending grief that makes him curse the poinsettia. Since then, the kingdom has been in the dark cold. Almost ten years have passed and there are now only a few days left to break this curse, otherwise gold hair will disappear forever. It was precisely at this time that 14-year-old Sonja (Vilde Marie Zeiner) fled from a gang of thieves to the king's castle. When she hears the sad story of his daughter's disappearance, she offers to search for the poinsettia for him so that the curse can be reversed. And so begins for the girl an exciting journey through a magical world, which becomes more and more dangerous for her, as the witch and the intriguing Count (Stig-Werner Moe) are on their heels. Because they want to prevent at all costs that Sofia finds the poinsettia - because then she would also learn the truth about her own origin...
<x>N</In 2012, "The Legend of the Christmas Star" was one of the most successful films of the year in Norway, winning the cinema charts even against international blockbusters such as "Skyfall". The reason is quickly found. Director Nils Gaup, who was nominated for an Oscar in 1987 for his directing debut "Pathfinder", has skilfully managed the balancing act between tradition and modernity in his enchanting fairytale film. Although he uses some very nice to look at special effects, he focuses on more original storytelling. Hectic pacing, over-enthusiastic humour or dialogues that are aimed at coolness - Gaup does without all these things, which unfortunately can be found far too often in contemporary children's films. Instead, he simply tells a beautiful, classic fairy tale that is imaginative, charming, exciting and simply very beautiful.

not only children are entertained, adult fairy tale fans also get the opportunity to dream here again and again. A nice set, lovable creatures, the very convincing cast led by newcomer Vilde Marie Zeiner and especially the story make this film based on a popular Norwegian Christmas play a very timeless fairy tale. At first glance, this may seem rather old-fashioned, especially since children's films are currently dominated by 3D animation adventures. But the success in Norway shows that even classically told fairy tales still have enough magic to inspire a large audience.

Thus "The Legend of the Christmas Star" is not only a beautiful Christmas film for children, but a fairy tale for the whole family - especially for such small and big viewers who like it a bit more traditional. And for that there is a more than deserved one: Worth seeing!

<strong>Picture + sound: The fairytale-like character of the film also comes into its own in the visual realization of the DVD. This is due to the truly magical, very powerful colouring. But also the high picture sharpness and the well tuned contrasts ensure that the absolutely clean picture of the DVD can leave a consistently positive overall impression. The sound is in a convincing Dolby Digital 5.1 mix, which is pleasantly lively especially in the somewhat adventurous scenes, otherwise the voices and the music are transported from the loudspeakers well tuned to each other. Good!

Extras: Beside the movie trailer and some outtakes (about 5:04 min.) the DVD has a very nice interview with director Nils Gaup to offer, but with 6 minutes it was a bit short.

Fazit: "The Legend of the Poinsettia" is a wonderfully traditional Christmas fairy tale, which with a lot of imagination, a beautiful set and good presentation has become an atmospheric and extremely entertaining winter adventure not only for small viewers. It is not without reason that the fairy tale was one of the most successful films of 2012 in its homeland Norway. Anyone who appreciates enchanting, lovably staged Christmas fairy tales will simply not be able to avoid this technically well produced DVD. Absolutely recommended!