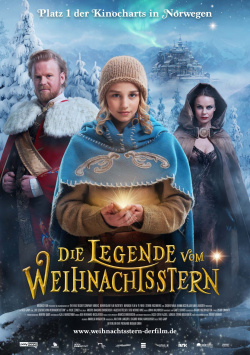 The Legend of the Poinsettia

When the young Princess Goldhair is cursed by an evil witch (Agnes Kittelsen) while searching for the poinsettia and disappears without a trace, a world comes crashing down for the royal couple. The queen dies of a broken heart and the king (Anders Baasmo Christiansen) falls into a never-ending grief that leads him to curse the Christmas star. Since then, a dark chill has descended upon the kingdom. Almost ten years have passed and there are now only a few days left to break this curse, otherwise golden hair will remain gone forever. It is exactly at this time that 14-year-old Sonja (Vilde Marie Zeiner) finds herself on the run from a gang of thieves in the king's castle. When she hears the sad story of his daughter's disappearance, she offers to go in search of the Christmas star for him so that the curse can be reversed. And so begins for the girl an exciting journey through a magical world, which becomes increasingly dangerous for her when the witch and the scheming Count (Stig-Werner Moe) take up her heels. For they want to prevent Sofia from finding the Christmas Star at all costs - because then she would also learn the truth about her own origins.

The Legend of the Christmas Star was one of the most successful films of last year in Norway, even beating international blockbusters like Skyfall in the cinema charts. The reason for this is quickly found. That's because director Nils Gaup, who was nominated for an Oscar in 1987 for his directorial debut Pathfinder, has expertly managed the balancing act between traditional and modern in his enchanting fairytale film. Although he makes use of some very pretty looking special effects, his main focus is on more primal storytelling. Hectic pacing, over-the-top humor, or dialogue striving for coolness - Gaup eschews all of these things, which are unfortunately all too common in contemporary children's films. Instead, he simply tells a beautiful, classic fairy tale that is imaginative, charming, exciting and simply very beautiful.

Not only will children be thoroughly entertained, but adult fairy tale fans will also get a chance to dream again and again. A beautiful set, lovable creatures, a very convincing cast led by newcomer Vilde Marie Zeiner and most especially the story make this film, based on a popular Norwegian Christmas play, a very timeless looking fairy tale. At first glance, this may seem rather old-fashioned, especially since children's films are currently dominated by 3D animated adventures. But the success in Norway shows that even classically told fairy tales still have enough magic to inspire a large audience.

So The Legend of the Christmas Star is not only a beautiful Christmas film for children, but a fairy tale for the whole family - especially for those young and old viewers who like it a little more traditional. And for that it gets a more than deserved: Worth seeing!

Cinema trailer for the movie "The Legend of the Poinsettia (Norwegen 2012)"
Loading the player ...