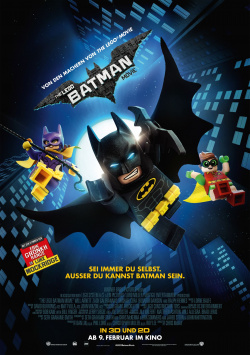 Batman has done it again: Gotham City is safe from the Joker and the other villains. Or is it? The new police chief Barbara Gordon sees it a little differently and thinks that Gotham would finally be safer if Batman would cooperate with the police. But that doesn't sit well with the masked avenger. When the Joker gets himself locked up in Arkam Asylum along with all the other villains, Batman doesn't believe the danger is gone for good. And to free the Joker from Gotham once and for all, Batman comes up with a plan - bringing chaos and destruction to the city once and for all. And he can no longer stop this alone.

The LEGO Batman Movie is after the great success of the LEGO Movie the second major motion picture around the popular colorful bricks from Denmark. Director Chris McKay (Robot Chicken) and his team have staged a colorful and flashy homage to the DC universe with all its heroes and villains, firing off gags every second. This is both the strength and weakness of the film. It is its strength because the countless surprises, allusions and details are just really fun to watch. At the same time, there is a certain over-saturation at some point and you get the feeling that there is just too much of a good thing. Especially when suddenly characters from the entire archive of Warner Bros. are brought out, one can not deny the impression that here a little less would have been more.

When Batman is allowed to make fun of his own cinematic career and the entire DC universe including Superman, Green Arrow, Flash, Catwoman and Co. is lovingly taken for a ride, the density of successful gags is really extremely high. If it's all about action, then the aforementioned oversaturation effect quickly sets in. Nevertheless: The film may not be a masterpiece and not as successful as the LEGO Movie, but it is a lot of fun.

In the USA, some top-class actors and celebrities could be won as speakers. In Germany, they couldn't resist the temptation to fall back on two voice actors whose names you can slap on the poster to attract a young target audience, but who audibly lack acting experience. A comedian (Luke Mockridge) and a YouTube star (Erik GRONH Range) are just not professional voice actors - and you notice that here and there, unfortunately. Otherwise, the German dubbing must be praised, however, because they have worked here primarily with real dubbing actors. For example, here you can hear Christian Bale's dubbing voice as Batman, which has an extremely amusing effect, especially in the very self-deprecating moments.

The LEGO Batman Movie is funny, playful and very weird. It's a little too overstuffed and chaotic in places, but that's entirely forgivable. If you love the Batman movies and were able to laugh heartily at The LEGO Movie, you can also warmly recommend this one. Absolutely worth seeing

Cinema trailer for the movie "The LEGO Batman Movie (USA 2017)"
Loading the player ...